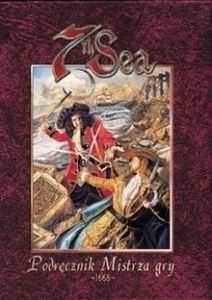 April Fools!  This is really more about an hour of digressions.  People keep asking what the point is, so here’s the point of that.  Actually have you ever seen the movie “The Point?”  That was weird, right?  Just that wobbly 70s line-art cartoon style you see in stuff like Pink Panther and occasional sex-ed cartoons, and a bunch of stuff designed to encourage you to think for yourself.  Sorta boring, honestly.  So yeah, the basic concept behind the April Fools joke was… y’know what I’ve noticed over the past few years is more people complaining about April Fools then people actually doing any April Fool’s thing.  I assume that’s more about the rise of meme-language.  Not that many people actually legitimately hate April Fool’s but anyone will share any image that has a minion in it.  That seems reasonable.  Hey, look at this clip.  Okay, I think that about wraps it up.

While there’s certainly reams of dirt to dish on the author of 7th Sea, there’s no getting around his raw talent for game design.  Jon Wick’s 7th Sea is a swashbuckling adventure game that more or less hits all the notes we want to see in a game.  Heck, even the entry for the seduction knack leaves “the opposite sex” out of there.  But are there cracks in the polish?  With the recent amazing success of the new 7th Sea Kickstarter, we find the original edition right in our crosshairs.  Enjoy!