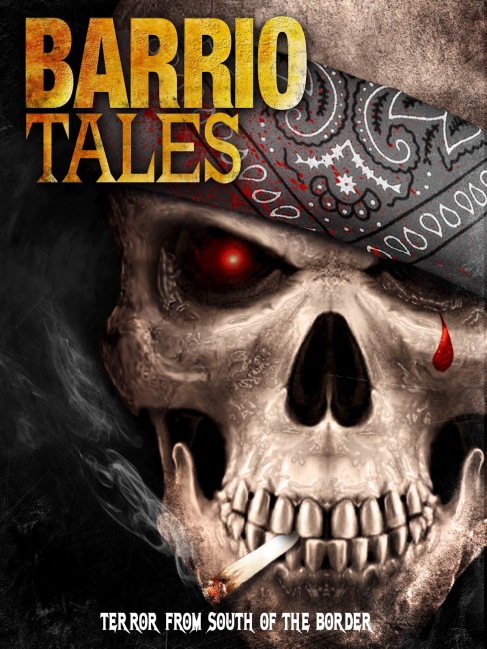 Today’s movie rounds out the last of the anthology horror movies for the week. This one is a little special since it actually focuses on Mexican people and stories rather than the ones we have seen thus far this week which predominantly focus on the black community. Barrio Tales has the central conceit of two white kids looking to pick up some drugs in Mexico. They meet a strange person while they are waiting that then begins to tell them about stories connected to the town of Barrio. Oddly, the bits that are part of the meta plot are shot and done in a very 70s style while the actual stories themselves are done with just standard effects and look like your standard modern lower budget horror.

The first story is called “Maria”. The titular character is a young girl that has just started as a live-in maid for a wealthy family where the parents are on vacation and the son comes home. This story deals with actual issues of racism and classism in a much more real and serious way than any of the others. She is referred to as being purchased and that the last maid was “probably caught stealing or deported” and is also reduced to a sexual object with the friends of the son calling “dibs” on her and at one point saying that since she messed up a billiards shot they she owes them a blowjob.

On top of this it also has one of the friends that is also Mexican but was able to attend the same school as the other rich kids. He is ashamed of his heritage and his friends don’t even know he can speak Spanish and have never been to his house. It shows how trying to blend in with people can make you abandon or even hate your own culture. The end of the story has the white friends being punished in a “Hear no Evil, See no Evil, Speak no Evil” way with the Mexican friend being a vessel for the vengeance. Sadly the rest of the stories don’t really end up being as interesting or as thematically compelling.

The second story is “Uncle Tio’s Taco Truck”. Here we see Uncle Tio selling tacos and is a beloved staple for the people in the community. We then get told that people have been going missing and Tio mentions he has a new recipe for his tacos. I honestly thought that this was going to be a fake out but nope, it’s your standard “delicious food is actually people” story. The actual interesting thing in this one is that it is probably the first time in any of the movies this week or any ethnically focused horror movie I’ve seen where they make whatever the race being focused on is the bad guy without it being a cautionary tale or made ok in some way. In this one the hero ends up being a white girl. So if not particularly good at least this one is fairly unique.

The third story is “El Monstruo”. This story deals with the dangers and persecution that come from crossing the border, although it does this in a fairly over-the-top cartoony way. After getting across the border, a group of Mexicans are picked up and drugged by your standard stereotypical “inbred redneck murder family”. The IRMF then proceed to torture and kill off several of them with probably the best scene being the more inbred baby brother killing someone and seeming horrified by the bled then saying “This is your fault. You wasn’t where you were supposed to be.” Even during the eventual revenge, one of them ends up responding with “I’m aint crazy. I’m an American hero.” So while they do at least deal with a real issue it is done probably a bit too ridiculously.

I always enjoy seeing horror from a different perspective whether it’s foreign like the Japanese, Korean, and Spanish horror markets that have become much larger or something like the Blaxploitation films we’ve seen this week. This piqued my curiosity to see if there are more of these Mexploitation type horror movies out there. This ends up getting a 2.5 out of 5 but I am hopefully we will see more Mexican or South American centered horror.