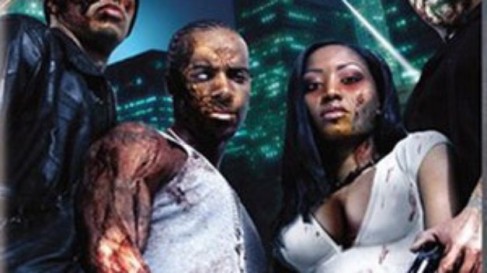 Of all the movies that I’ve reviewed this week, this one has definitely been the only one that managed to have a ghetto setting but not be entirely focused on one particular race. In fact, the movie ends up being more about racial dynamics than pretty much anything else. The premise for the movie is that a meteor strikes a group of homeless people, turning them into the living dead, at the same time nearby a drug deal is going down with two rival gangs unaware that the cops are just waiting to go and bust them.

So we have a Rainbow Coalition of people in this one. A couple white cops and a weatherman. Three black gang members and the sister of one of them. Three Mexican gang members and the Asian girlfriend of the leader. The tension of the film hinges much more on the group being forced into close quarters and dealing with each other than the zombies, which is definitely for the best. We see the slow disintegration of the group as power dynamics shift depending on who has the guns. Probably the main “villain” of the whole thing would be Caesar, the leader of the Mexican gang, who ends up caring more about being in charge than making things work smoothly.

The movie is also oddly obsessed with religion for the first part of it. Hell, the original title was even Last Rites before it got changed to Gangs of the Dead for the DVD release. The homeless that are hit by the meteor are listening to a street preacher. One of the gang members talks about getting out of the game because he found god and the Aunt of one of them talks about the meteor shower as “god’s glory”. However, that aspect is almost immediately dropped as soon as the zombies start showing up. It would have been nice if at least the character that “found God” had mentioned something about it while it was going on. It seems instead of finding religion in a catastrophe, the movie loses it.

The movie, on the whole, is pretty low budget in most ways. The camera isn’t particularly amazing and the sound is especially bad with several scenes happened where you can’t even hear people talking because of background music or noise being too loud. There is also a good deal of random inconsistencies which just bother me like the cops driving around in a van for a while trying to get away and when they crash into the warehouse where everyone else is, a bunch of zombies pour out.  Come on, man. Who isn’t going to notice an entire group of zombies just hanging out in the back of your vehicle? It also tends to drag on a bit . The power dynamic is never a struggle but really just whoever has a gun is in charge (first the cops, then Caesar). Instead of getting to know the characters at all, we just get a lot of fighting and arguing.

Now, I have a thing with zombie movies where I can’t help but see them as being revolutionary metaphors. The first to “rise up” are the homeless or the most put down. The first victims that they end up devouring are the police or the symbol of oppression. The next infected are the gang members and the only times one of the members is turned into a zombie instead of killed is when they are cooperating in some way. The “infection” of revolution can only spread when we work together. Otherwise we just end up killing each other over our differences. While I’m pretty much certain. I’m pretty much certain that the writers never intended that but I honestly can’t see a zombie movie without that coming up.

In all, the movie suffered from a lack of depth to the at least decent set-up that they had created. A diverse group that doesn’t like each other trapped in a small area against a common foe is a great way to do a good character study on things like race, gang mentality, or just the people themselves. Instead it devolves into a slow moving shamble to the inevitable end. I give this movie a 2 out of 5 and really wish it had been done better.