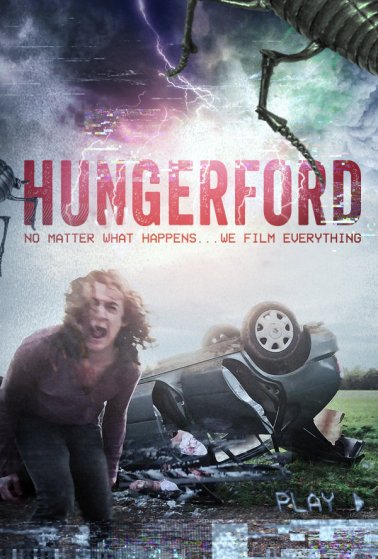 Hoooooly crap. You know, this year’s Horrortoberfest crop was actually pretty good, all things considered. However, we are going to bookend this year with another super low budget found footage film that sucks absolute shit. I’m not sure what I thought this movie was going to be when I started watching it and, as far as I can tell, the film makers didn’t know what this movie was going to be when they started filming it.

In the town of Hungerford, England, a group of friends mostly sits around their apartment and drinks and are shit to each other until it turns out that there is an alien invasion happening. Giant fuckoff cockroach looking bugs burrow into the back of a person’s neck and can puppet them such that they become mindless murder machines unless they aren’t. However, they discover the aliens’ one weakness: spray deodorant. Bear in mind that this is all taken extremely seriously and is not in any way a comedy. They are also filming all of this because a movie has to happen.

I don’t even know how to begin to explain to you the myriad ways in which this movie fails on pretty much every single level. I guess let’s start with the conceit of found footage. I know that it is the bastion of the low budget horror, of which this most definitely is, but at least there is usually a paper thin reason for why people would continue filming. In this movie, the filming starts off as a college project to document Cowen’s life but he apparently wants to fail as the only thing he shows is wandering around in a bathrobe and getting blackout drunk. When shit starts to go wrong, they keep film because Cowen says they need to for posterity or some reason. What’s infuriating is that the camera has actual digital tear when near one of the aliens, meaning there is a built in reason to keep filming as a warning system but they don’t ever acknowledge that the picture fucks up around aliens and that makes it doubly awful.

Moving on, we tackle the monster of the movie, which could be the bugs or I guess there might be aliens controlling the bugs? Anyway. Mind control parasite is a tried and true monster that we’ve seen plenty of times. That’s not really what I take issue with. So they find out that deodorant can kill these bugs. Or maybe it just makes them freak out? The first time they spray someone with it, the guy’s face melts and he dies. The second time, it’s when one of the roommates gets infected and now it just causes the bug to leave but he is fine even after a footlong roach burrowed into his head. Then, they spray someone and it causes the bug to leave but also the person it was in dies. If all that wasn’t enough, they then stop using it for the back half of the movie even though they have a giant supply like they just forgot they had an anti-alien parasite super weapon.

Not quite done with the monsters yet because we also have to deal with the possessed/zombies. At first, we see some very clearly infected people and they just seem kinda ambling and mindless. A day or two later, they turn into 28 Days Later style fast rage zombies that want to murder. Then they start maybe kidnapping people but killing anyone that resists but everyone resists so I don’t even know how that’s a thing. We even get a shot of one of them at the end just calmly going about his business of putting cobwebs from Spirit Halloween on people and not murdering the very clearly uninfected person that has broken into the secret bug hideout.

All of this leads me to the very confused tone of the movie and what type of film they were trying to make. At first, it seems like a body snatchers scenario where people are acting strange but not enough that it would cause any alarm. Then it turns into a full blown zombie survival film as they try to escape the rage zombies that are killing everyone. When Cowen goes to rescue some of his captive friends, it turns into a monster film as he has to rescue people from web cocoons and there is some kind of monster thing down there that we don’t really get to see. And then the army shows up and it turns into a fucking first-person shooter with soldiers shouting very generic video game lines and I cannot emphasize enough how much it straight up is shot like they wanted to make a Call of Duty movie.

I almost don’t even care that the effects are low grade YouTube video editor quality or that the writer and director was also the main character and also the worst actor by far. There are so many terrible moments in this movie I could dissect it for pages but I think you get the gist.