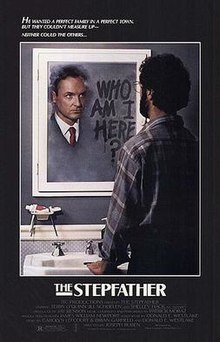 Time for yet more low budget horror films from the 80s. I have to say, I almost feel like I was cheating with this one since it’s an actually decent movie and not just ridiculous schlock.  I might have to judge this like I would any other film and not just through the lens of my love of shitty horror like I had been. I mean this thing has Terry “Don’t You Tell Me What I Can’t Do” O’Quinn in it! How could this be anything but a spectacular success?!

The opening to this movie is absolutely fantastic and sets the tone for the film perfectly. We see a man covered in blood calmly and methodically wash his hands, set out a new pair of clothes, and take a shower. He shaves, puts in some contacts and combs his hair. Putting on the new suit, he leaves the bathroom, stopping to straighten things up in the hallway as he goes. When he gets downstairs there is a gruesome scene with multiple dead bodies and blood splattered everywhere. He stops, looks around, fixes a cushion that had fallen down, and then leaves the house whistling a merry tune. O’Quinn pulls off this character of a calm psycho obsessed with the perfect family so damn well.

The movie really spends the rest of its time doing a very slow burn on the new family. The daughter feels something is off with her new stepfather but nobody believes her. Even she starts to think she is wrong eventually and comes around to liking him. Hell, for most of the film he is a genuinely kind, concerned, loving person. However, as soon as the realization that this family won’t live up to his unrealistic expectations, he begins to look for another place to go and another family to work his way into. Again, Terry O’Quinn sells this character so well. So many little moments, especially towards the end of the movie, give us a closer glimpse into the character where we never find out anything about his past but you can tell there is so much going on with him.

There are two notably odd things concerning nudity in the movie. One is that we see some dong in the beginning shower scene of the movie. Notable mostly because you pretty much never see that in movies and I appreciate equal screen time. The only other nudity in the movie is towards the end where the daughter ends up also taking a shower. While a nice visual bookend of sorts for the beginning of the movie, it’s actually mostly noteworthy because it is mentioned several times that she is 16 years old. Dear movies, please don’t present to me an underage girl (yes I know the actress is older) and then have her get naked and be sexualized. I get that sometimes it’s for a powerful narrative reason but it’s still creepy and not in the good horror movie way but in the pervy, pedo way.

In all this is a very strong example of this type of horror genre which is basically that somebody new in your house is actually a crazy murderer (e.g. – The Hand that Rocks the Cradle). I’d give it a 4.5 out of 5 solely on the strength of the acting.