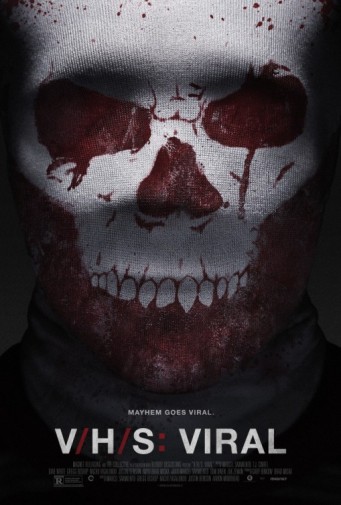 I’ve already reviewed both of the previous anthology movies in this series for previous Horrortoberfests. Going in to this I knew what to expect but then they shook off the conceit that was generally used in the first films. Namely, the set-up movie that ties the other movies together for the first two was someone stumbling on some tapes and watching them. This time there still seems to be a plot that runs between movies but it has nothing to do with them and the other shorts just run at different intervals. It is still all found footage type stuff so if you hate that then this is just a bunch of mini ones strung together. Like the other anthology stuff I’ve reviewed, I’ll take this one short at a time and give a brief review and score for each.

Vicious Circles – This is the meta-film that starts us off and runs through the whole thing. It follows some random clips of a guy that films his girlfriend a lot and then a police chase goes by while he’s filming and the car somehow kidnaps his girl. As the ice cream truck on the run does circles around the town, it leaves destruction in its wake as every time it goes by some place, something happens where someone dies. This is kind of shit and more than a little annoying. Lots of that “tearing” video effect and jumps between past videos he’s taken. It also makes no sense in the overall lore of the V/H/S universe and I hate myself for even being able to know that. Score: 1 out of 5

Dante the Great – The first of the short films, it follows the career of Dante the Great as he discovers a magical cloak that is for real legit magic. Unfortunately, it also appears to have some kind of demon in it that needs to get fed people. Some apprentices go missing as well as some other people and finally the cops come for him. Sadly, he is a quadratic wizard in a world full of linear fighters. It has a fun premise like one of those old Amazing Stories shorts. The gore is on point but when it comes for the climactic fight against his newest assistant he randomly decides not to just wave his hand and kill her. Like an idiot. Score: 2.5 out of 5

Parallel Monsters: A Spanish scientist constructs a machine that will open a doorway to another dimension. On the other side he sees his mirror double has built the same machine. Both curious to see what is going on, they agree to swap places for 15 minutes to see what the other world is like. Turns out that the other world is like ours except they have monster genitals. Like, literal monsters bits for genitals. This does not end well for either of them. This was probably the most interesting of the various shorts. The slow reveal of things being nowhere near what they seem to be has little twists and the monster junk is pretty amusing. Score: 3.5 out of 5

Bonestorm – Some skateboarders hire a cameraman off a Craigslist to make a skate video for them. He is more interested in seeing them get hurt since that sells better. When they get kicked out of every place they try to film because of the camera guy’s douchery, he suggests going to Mexico to film. The start skating in a place with some weird sigils in it and when one guy bleeds on it, all hell breaks loose. They start fighting what appears to be Mexican undead cultists? And there’s a some woman with super strength that doesn’t do much? And there’s a giant monster at the end you see for a split second? This one is kind of all over the place and mostly just exists to show some guys killing skeletons with skateboards which I’m sure is probably somebody’s fetish. Score: 1.5 out of 5

Overall, this was the weakest entry in a series that is already defined by how mediocre it is. Good job.

Favorite thing in the movie: Monster-gina

Least favorite thing: I hate that I was so annoyed at Vicious Circles for not tying into the plot better. I feel shame.