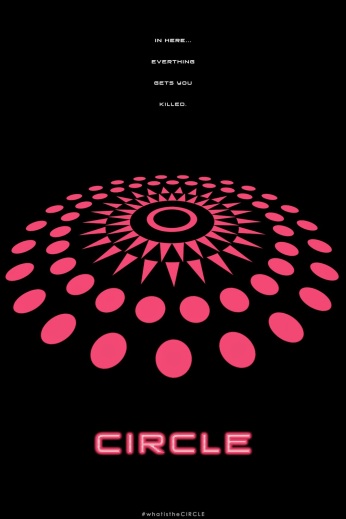 This was actually on my list for last year’s Horrortoberfest but it never managed to get selected. Which is amusing given that it is a movie all about selecting people. Also, this is one of the few movies on the list for this year that has a somewhat decent rating. Which is nice given the turds I just watched but also kind of sad because I may have just gotten one of the better movies I’m going to see this month out of the way towards the beginning and now I don’t have much to look forward to.

Circle opens, appropriately enough, with a room full of people standing in a circle. There are circles under their feet and arrows pointed at each of them. We come to find out that if you leave the circle, you die. If you touch someone, you die. Everyone can move a light around that only they can see and then vote on people. If someone gets the most votes, they die. If nobody votes, somebody dies at random. If you tie and there is no tie breaker, everyone in the tie dies. With this knowledge, a group of 50 strangers need to decide who lives and dies as they struggle to figure out what is happening.

This is one of those very simple concepts for a movie and it all plays out within a single room. Which means that it really has to lean heavily on the skills of the actors and the intelligence of its script. Thankfully, both of these things happen to be very good in this case. While some of the actors in the circle may be ones you’ve seen in other things before; mostly these are people you’ve never seen before in anything major. This helps since the movie is going to kill people off at a rate of about a little more than 1 every 2 minutes and helps to keep your focus on what’s happening if you aren’t thinking, “Well, they can’t kill them off because they’re too famous.”

The actual choices and debates end up happening much like you might think it would. People are singled out because of race, religion, age, sexuality, or anything else that might make you different. This also leads to people being singled out because of their prejudices, their outbursts, or their bullying. We get to see how these people react to the situation by trying to figure out why it’s happening, by trying to stay alive, by trying to protect others, or simply staying out of it. It ends up being very tense and like a giant murder machine version of 12 Angry Men which wasn’t something I knew I wanted before but now that I think about it; of course that would be something I wanted.

I don’t want to get into the details too much but there honestly aren’t a ton of details to give beyond the basic premise. I will say that this is definitely a recommend if you like your horror to be more human focused and more about the suspense than the gore. I give Circle a 4 out of 5. Good all the way to the end.

Favorite thing in the movie: I love that it was all confined to just a single room. Being able to make that compelling is difficult.

Least favorite thing: I think I probably could have done without the ending that they had.