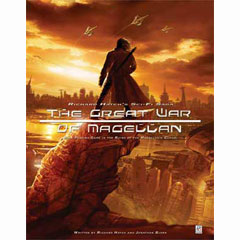 So… this one didn’t really have any art assets large enough to use for the rotating display thing.  Please enjoy a fine Magellanic Penguin.  It’s as relevant as anything else would have been.  This game is about a big war in space between the evilloids and the goodites.  It was written by a fellow who starred in the 70s Battlestar Galactica.  There’s a surprising amount of information about agriculture.  Have a good time!

5 responses to “The Great War of Magellan- System Mastery 65”