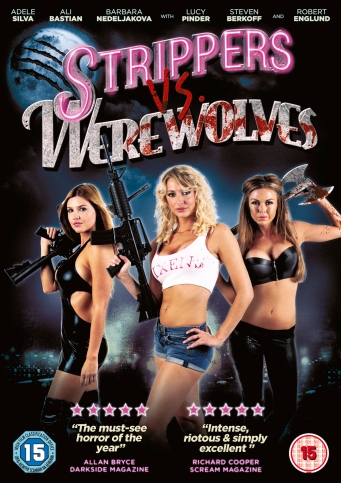 This week we revisit that age-old classic story trope of strippers fighting some kind of horror movie monster.  This time around it’s werewolves.  Let me say, right off the bat, I actually really enjoyed this movie.  I’m not sure if it’s just because watching anything halfway decent after yesterday’s movie would make me think it was Citizen Kane but this was an actually fun romp of a movie. As the title suggests, there are strippers and they fight werewolves but, surprise!, this movie also has a for reals plot.  It’s like they had an actual script or something, it’s crazy.

The opening credits are played over the classic hit “Hungry Like the Wolf” by Duran Duran. This immediately made me hopeful that if they were willing to actually buy the right to something then they might have put some effort into it. The opening scene has someone doing a striptease in a private room but no nudity, which is going to be fairly consistent in the movie.  None of the actual actresses get topless though for one specific scene it looks like they actual hired a real stripper to come in. You can tell because she seemed to know what she was doing where the actress just sort of spun around the pole trying to look sexy.

Another thing to note is that this movie is very British. The direction, plot and acting feel like either the writer or the director just finished watching Snatch or Lock, Stock and Two Smoking Barrels before going to work on this project. Hell, the bartender for the strip club is even Alan Ford who was in both of those movies. They really wanted to make an Guy Ritchie movie but had all these werewolf costumes lying around.  You have a plot that weaves through the werewolves and the strippers as it turns out that one of the strippers is engaged to one of the werewolves but neither knows about the other’s secret. You get a lot of set-up for things that become relevant later on and multiple call backs to earlier dialogue or scenes. While not exactly ground breaking on its own, the fact that this much thought was put into a movie called Strippers vs Werewolves is insane.

The relationship story between the two protagonists of either group is actually pretty good. After the possibility that he infected her with the werewolf curse, the “alpha wolf” tells him that he has to kill her.  There no ladies allowed to become werewolves according to him. While this might have set up a “star-crossed lovers” scenario where they try to get the factions to stop fighting in another movie, here is just causes the two of them to become become rivals. It also has a Van Helsing type character with the twist of actually being a huge, socially awkward dork that can’t handle dating a stripper because she’s “too cool for him” even though he hunts vampires for a living.

I don’t want to say that everything in this is amazing. The effects on it are pretty poor including the werewolf makeup itself which just looks super goofy.  This is much more in the Wolfman type where they remain mostly human looking with little wolf touches rather than a The Howling type werewolf that is more anthropomorphic wolves. Also, while I understand it is trying to be very stylized, it probably went a little heavy on the wipes between scenes.  At one point it uses a wipe in-between several scenes that each last maybe 10 seconds a piece.

However, the movie is very aware that it is a low budget movie and works within that. The very end of the movie actually features someone coming out of a movie theater saying how they enjoyed it and that “a movie doesn’t have to be art to be fun”. This is pretty much the whole idea behind this.  Where something like Zombies vs Strippers was made pretty much exclusively as a way to show off breasts; this movie wants to make a fun, silly movie that just happens to feature strippers without really focusing on that aspect to the exclusion of the plot.

In all, this stands out as a shining gem in the sea of shit that T&A week has been so far. It’s worth noting that they managed to get Robert Englund to show up for three minutes and show everyone how to act. I would give this a 3 out of 5 and wouldn’t feel bad recommending this. I might even go as high as 3.5 just as a special bonus for being in a sub-genre that is normally the absolute worst.