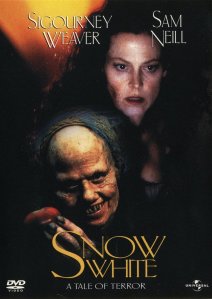 In this movie we have an actual retelling of a classic fairy tale rather than just using references to it.  This movie also has Sam Neil and Sigourney Weaver in it.  Having actual actors in your movie really makes a difference (THIS IS PRIMARILY AIMED AT ALICE IN MURDERLAND).  So we have Neil as the father and Weaver as Claudia the evil step mother to Lily because who actually names a kid Snow.  It hits the standards for the story with the “dwarves”, the apple, and the glass coffin but has a really unique and weird way of getting to them

The story is well done as re-tellings go.  So often you run into something like Hansel & Gretel fighting sexy witches instead of doing a real reimagining of things in an interesting way.  The movie starts with Lily being kind of a brat and the “evil step mother” actually being really nice.  She seems to want to actually reach out and connect with her step daughter but Lily is basically just obsessed with her dead mother and undermines Claudia whenever she can.  This ultimately culminates in Claudia having a miscarriage after Lily wears her dead mother’s dress to a party.  At this point the whole thing spins out from being the standard fairy tale into actual horror as Claudia has a complete mental breakdown after the death of her unborn child and she turns to dark magic.

The has an odd part with Lily meeting the “dwarves” which are just poor miners living in the woods trying to find gold.  It turns out that they are bound together by their refusal to fight in the crusades and each bares scars from where they were tortured for the refusal.  This makes an odd juxtaposition between the dwarves and the castle.  The dwarves rejected faith and live in an abandoned church with broken stained glass making for a great metaphor for the broken belief that they have.  The castle however is run by a devoutly religious man and has its own chapel but is corrupted by this “pagan” force in Claudia’s black magic.  This doesn’t get as developed as it could have but makes for a strange backdrop for this classic tale.

The acting in this is fairly solid all-around but Sigourney Weaver really knocks it out of the park.  Her ability to sell the grief and insanity is amazingly well done.  When I first started I was kind of surprised since I don’t really think of her as being the typical cast you would have for the “Vain and Beautiful Queen” of the story.  It works wonderfully though and the reasons for hatred are more to do with insane grief than any sort of petty need to be the prettiest one there is.  I also feel bad for Sam Neil because every horror movie he gets in he just has to end up going crazy by the end (See also: In the Mouth of Madness, Event Horizon).

In all this was actually much better than I thought it would be.  The horror aspect of it takes a while to really ramp up but by the end it is doing a good job of being super creepy and most of that goes to Weaver’s performance.  It does a great job of blending the familiar with the horrific and, while not spectacular, I would give it a 3.5 out of 5.