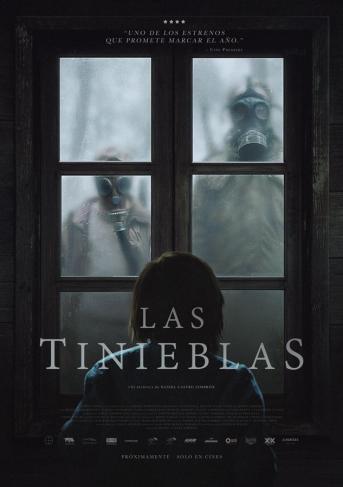 Let me just say, the reason I’m using the Spanish title instead of the English one like I did the other ones is because there is a different movie from 2016 also called The Darkness starring Kevin Bacon, so I didn’t want things to be confusing. I was drawn to this movie by the promise of a post-apocalypse setting with survival horror as a young man tries to figure out what happened to the world. Instead, I got…whatever this is.

In the world outside the cabin where our main family lives, it appears to be eternally light but not really bright day time and perpetually covered in fog and clouds. The children are made to sleep in the basement while the father locks them in at night. When the older brother, Marcos, goes missing on one of the trips into the woods with his father; the younger brother, Argel, decides to do what he can to find out what happened to him. Was he taken by the “beast” or did something else happen? Also there is a younger sister that is sick that is also in this movie.

The way in which I described this movie is about as dry and interesting as the movie presents itself. Nothing in this movie feels like there is tension or danger, even when there clearly is. Even what would assumedly be the main scare of the feel, The Beast, is never seen on screen and the characters don’t even seem to be particularly afraid of it. They just kind of hunker down while it makes noises and plods around and then go on with their day like nothing. The possible intrigue of other people is barely dealt with and even when it seems like there is going to be some kind of conflict; it is immediately ended and we move on.

Perhaps one of the worst things about the movie being this boring is that they don’t even begin to get into what is happening with the setting. If you’re not going to make your eerie mist covered world remotely scary, the least you could do is make it interesting. We get one moment where Argel finds a car in the woods and doesn’t know what it is but his father does. That is the only measure of possible timeline for how long things have been the way they are. I don’t even need a definite explanation of why but an explanation of what would be amazing. Tell me what happened, how did they react to it, or literally anything that would lead me to believe this doesn’t just take place in a regular, misty forest.

While there are a couple decently done build-up moments in the film, there really isn’t any release or closure to them. Everything was competently made and was shot well done but there was nothing to hold onto. It’s not that the movie is particularly bad it’s just not remotely worth watching. Oh the little girl keeps bugs in a jar and I guess that’s a metaphor for the family being preserved and trapped by the father. Great. Whatever.