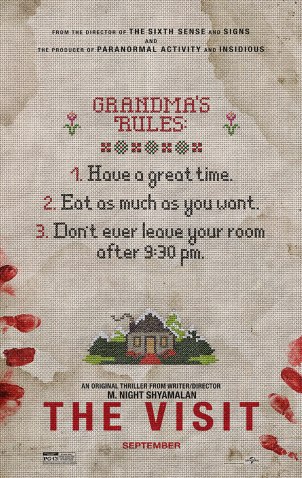 I’m not one of those people that jumped on the Shyamalan hate bandwagon. He’s definitely made some stinkers but there are a ton of directors that never got the backlash that he did. That being said, he definitely relied a little too heavily on a certain style and this seemed like a break from that. I didn’t realize this was going to be a found footage movie going in and it ends up being both a great framing device for the brother/sister scenes but kind of takes you out of things when it starts to get scary.

Becca is an aspiring documentary film maker at the age of 15 and decides to make a movie out of a trip to their estranged grandparents’ house while their Mom goes on a cruise. Their mother left when she was young to run off with an older man and they hadn’t spoke since. They warned her he was no good and it turns out he did eventually leave her. Taking her little brother Tyler with her, Becca hopes that she can gain a modicum of reconciliation and forgiveness between her mom and grandparents. While they seem nice, there is something going on with Nana and Pop Pop that isn’t quite right. Is it just old people being old or is there something more sinister at work?

The first half of this movie really makes you want to dislike Tyler. He is a white, 13 year old “rapper” that calls himself T-Diamond Stylus and he is constantly being just a giant asshole behind the scenes to Nana and Pop Pop. Most of the time you end up feeling bad for this old couple that want so badly to connect with their grandkids but are slipping into dementia. The few times where Tyler comes across well is in his interactions with Becca. Their shared guilt over their father leaving makes for some very sincere and dramatic moments with the two, like Tyler sharing a moment where he just froze during a football game. Tyler also has a germ phobia which was apparently brought on by their father leaving which feels very tacked on.

Spoilers: When we finally get to the end and the kids are talking to their mom on Skype asking her to come get them early, we get the reveal that those aren’t their grandparents and it’s a great “the call is coming from inside the house” moment. There are little hints dropped throughout but much of it could have just been chalked up to them being old. Turns out they were patients at the mental hospital the real grandparents volunteered at and when they heard about the grandkids visiting, they killed them and decided to play pretend. Honestly, the concept of sundowning and dementia is already terrifying and could have been left at the. However, the twist here doesn’t feel forced or contrived and instead plays into the themes already in play.

Score: 3 out of 5. The shaky cam of found footage is always going to be annoying and there are more than a few times where Shyamalan tries to cut back and forth between comedy and horror where it doesn’t work. That said, this does offer up some very real scares and tension with a believable enough backdrop.