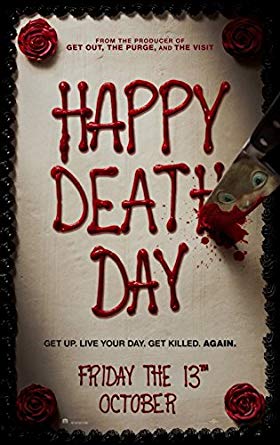 Turns out what was originally just going to be Purge week is turning into an entire Blumhouse Productions week. This is another one that I have been meaning to see for a while. Who doesn’t love the idea of a horror version of Groundhog Day? I love that it takes what would have been the establishing kill in your standard slasher film (a sorority sister that’s kind of mean) is instead made to be the focus of the entire movie. They even put in an interesting twist on the whole time loop scenario that I’ll get into in the spoilers.

We open on Tree (not sure if short for Triana or something) waking up in the room of Carter. This will happen a lot. She goes about her day being generally terrible to people, having an affair with a teacher, and just embodying every stereotype of the sorority girl murder victim in a horror film. Eventually, she is indeed killed. Surprise! She wakes up, it’s the same day, and she must relive it all over again. She tries to enlist the help of Carter or anyone else she can in order to find out who is killing her and how she can stop it. But it’s a PG-13 movie so there isn’t exactly a lot of bloody death as much as comical, *sad trombone from the Price is Right* style death.

The thing that I love most about this is the choice of victim and the way that it’s played. As mentioned, this would be an otherwise disposable character meant to show that the killer means business before we move on to the real main character’s struggle. Centering the narrative around Tree is a wonderfully subversive move since it serves as a reminder that all those people that would usually be seen as “punishment killings” (such as Mean Jocks, Bitchy Sorority Girls, and so on) are still people and have shit going on. Tree shares her birthday with her late mother and it makes the day that much harder for her. We see her struggle with being a good person, running away from and ultimately facing the problems that she has. A redemptive story about someone we would otherwise possibly even be rooting for to die in another film is a fabulous choice to me.

Spoilers: So the time loop stuff. First of all, let me just say that we don’t ever find out exactly why it is that the loop is happening, only that it is triggered by her death. The interesting thing about that I referenced earlier is that it isn’t exactly a perfect reset. Every time she comes back, she is left with internal scarring and injury from how she died previously which makes her weaker every reset. This gives the movie the sense of urgency and stakes that it otherwise might have lacked had it stuck entirely to the Groundhog Day version. Speaking of, I also like that the loop isn’t based on her becoming a better person but just not dying and becoming a better person ends up being a byproduct of that process.

Score: 4 out of 5. Enjoyable to watch. A fun premise with some light scares and violence. Definitely a horror film that you would be able to watch with a friend that isn’t normally a fan of scary stuff.