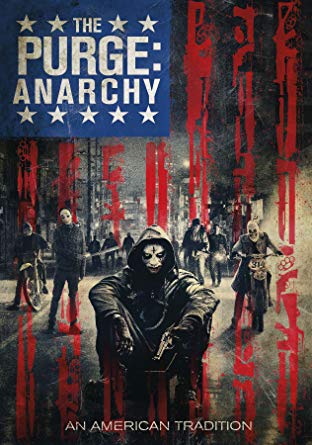 Now for the second installment in the Purge series of movies. Where the first one focused on the perspective of Purge Night invading into what would normally be a safe haven for the rich; this movie focuses on those that have to deal with the night when you aren’t wealthy. Now, I know that one of the main ideas of the franchise so far has been profiting off the murder of the less fortunate through gun sales, home security, and so on. However, I can’t help but wonder just how much it ends up costing in property damage in any given Purge and if that outweighs the money the government/rich are netting? Just something that pops into your head when you see a city bus rolling down a street on fire during the movie.

Our story takes place a year after the first one and follows three different groups that end up coming together on Purge Night. First is a mother and daughter that end up having their building assaulted while trying to avoid the Purge. Second is a couple that is having issues that end up getting their car sabotaged by some people in skull masks and have to try to find refuge while being stuck outside downtown. Finally, we have Frank Grillo auditioning for the Punisher. His character wants to kill the guy that killed his kid and got off on a technicality and he will be the savior of the first four people. There is also a ton of business going on in this movie with the recurring skull mask guys, recurring guy in a semi with a squad of fully armed/armored dudes, an anti-Purge group that is trying to fight back, and a ton of other stuff.

It’s a pretty scattered movie, all things considered. What you lose from the first film is that tightly focused narrative with very clear stakes. While this film does get a little deeper into the Purge lore and happenings, it also ends up feeling more like the characters are just being taken on a tour of the Purge’s greatest hits. You also lose a lot of the tension that you had in the first movie since the family was just regular people trying to fight back but in Anarchy, the characters are all being protected by a super soldier that not only knows how to fight but also knows a ton about where to go and how to maneuver around the city on Purge Night. Being hunted would be a scary scenario but when it’s rich socialites vs. commando, it feels like the situation is mostly under control.

Spoilers: While I had gathered from the previews for some of the later films that the government was sending people out to kill folks, the fact that one of the guys just straight up tells Grillo aka The Sergeant as much seems kind of odd. I suppose it’s there because they movie wants to say that there aren’t actually that many people that would want to go murderin’ and it’s the corrupt government that tries to keep the holiday relevant by sending out kill squads to inflate the numbers and make it look like more citizens are participating. It was also nice to see the homeless guy from the first movie back and now working with the anti-Purge activists. Their idea that the only way things will change is if you make it dangerous for those in power is a great, smart way to turn the Purge around on the oppressors.

Score: 3.5 out of 5. Definitely not as strong as the first movie but certainly still enjoyable enough with some decent performances and some evocative imagery. Sadly this felt more like a movie that wanted to “fill in the gaps” for the franchise and less like a cohesive story.