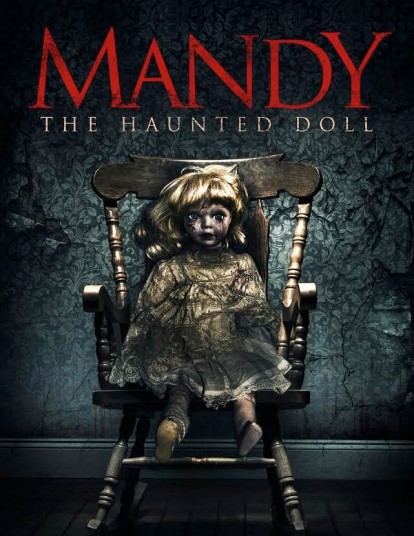 Since I gave myself a little treat with yesterday’s movie being an actual horror movie with a budget and for real actors, I shall now punish myself with the self-flagellation that is bargain basement, no budget British horror. You know you’re going to get quality when the movie has to tell you in the title what the movie is about. I wish more things had titles like Jaws the Hungry Shark or Leatherface the Chainsaw Cannibal. The movie especially wants you to know about Mandy being a haunted doll as it starts with an opening text explaining Mandy dying and possessing a doll, then shows you Mandy dying while holding a doll, then we get told the story of Mandy the Haunted Doll by the opening scene victims, and then told one last time by a creepy old lady. If there is one thing you will learn from this movie it is that Mandy is a Haunted Doll.

The story mostly centers around the three most idiotic would be thieves in the world. Amber has just gotten out of jail for unspecified crimes and now her sister and her sister’s boyfriend want to use her to rob a house. While reluctant to plan a heist on the literal day she gets out of jail, she eventually relents because something something sisterhood. Amber will pose as a babysitter and then call up the others after an hour to come rob the place. Turns out the kid she needs to babysit is Mandy the Haunted Doll, so things don’t quite go according to plan. Which is probably for the best given that their plan was idiotic in the first place. They were going to wait at the house for the fence to come over with a bag of cash which they would exchange at the house of the person their robbing. Everyone involved in thinking that was a good idea should feel ashamed of themselves.

So the first thing you notice as soon as you get the opening mini-scene of the doll killing a couple people is that this movie has literally no budget for anything. The doll is moved around by someone just off screen turning it around and making it “walk” by wiggling it back and forth while pushing it forward and you can’t see the feet. The doll has a trick of turning out the lights but it literally turns out all light such that at one point I thought the movie had faded to black for a scene transition but it turned out it was just that the lights had gone off. When the boyfriend in the beginning scene gets killed, he is clearly spinning around yelling under a blanket with nothing under there with him. They didn’t even bother to have him hold the doll like it was attacking him or anything.

Spoilers: Perhaps the most infuriating thing is the characters and their complete stupidity. One of the first things was Amber gets on board the “this doll is alive” train immediately with the only evidence being that the baby monitor spouts out some creepy kid laughing and then she talks to Mandy on the baby monitor even though that isn’t the way baby monitors work. Then, no less than three times once the doll starts being all murdery, Amber tries to convince her sister they need to leave and then doesn’t go to the front door which is down stairs. Hell, at one point her sister starts going down stairs and she tries to stop her saying “We need to get out of here.” That the kind of high quality idiocy you can expect from this movie. Also the ending is a 3 months later thing that drags on for a while about a mom that lost her kid and so she and her mom get a place out in the country where they find Mandy the Haunted Doll. No idea how she got there since the last thing we see before that is Amber trying to drive off but the doll is in the backseat. Also, the grandmother at the end is in the hallway, having apparently gone from 0 to crazy in record time, breastfeeding the doll even though the doll is supposed to be haunted by a 12 year old girl so nursing makes no sense and oh my god fuck this movie.

Score: 1 out of 5. This movie is shitty in every conceivable way. The only redeeming factor is that it is blessedly only just barely feature length at about an hour and 15 minutes.