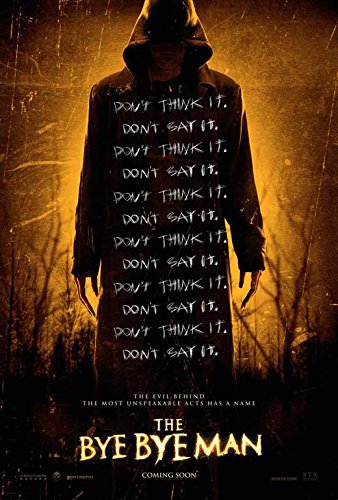 This movie was pretty notoriously made fun of when it came out and, honestly, who can resist when you are faced with possibly the dumbest name for a horror movie that tries to take itself seriously. I also heard that it was pretty bad, even when you put aside the whole issue with it having the worst title. Imagine my surprise when I watched the film and found it to be a pretty much run-of-the-mill horror movie with nothing that really stands out as particularly good or bad. Having a stupid name is probably the best thing to happen to the film since at least that would get people to talk about it.

Our story follows three college kids as they move into an apartment off campus but, uh oh, something’s not quite right. Elliot finds the name “Bye Bye Man” carved into the bottom of a nightstand drawer and as soon as he says it out loud, all hell breaks loose. Apparently anyone that knows his name attracts the Bye Bye Man and the more you say or think about it, the closer he comes to getting you. He can make you see things or not see things and generally just has vague supernatural illusion powers. Can our heroes figure out how to stop Doug Jones and his terrible CGI mastiff? Spoilers: No, they cannot.

I’m not really sure where a lot of the vitriol for this movie was coming from. I even heard people saying that it was “the worst movie of 2017”, which is just patently not true considering both The Snowman and The Emoji Movie came out that year. The concept of a viral idea that kills you once you know about it is actually a pretty cool thing to center a movie around. What is less cool is making the viral idea be a train hobo called the Bye Bye Man that likes to fuck with you for a very unclear amount of time before making you kill others/yourself. The main characters only go murder crazy after what appears to be a couple weeks where as one of the 4 original people to hear the name does so in a single week and a librarian that hears the name murders her family and wants to kill them basically overnight. I guess people just have different tolerances for how much vaguely menacing pointing from a guy in a hoodie they can take.

The only real interesting thing in the film is that it has this odd connection to mythology for seemingly no reason. The Bye Bye Man himself is associated with 3 things: a dog, coins, and a train. If you’re like me, that pretty much immediately brings to mind the thought of Charon, the boatman of the river Styx. The dog being representative of the three headed guardian of the underworld,Cerberus. The coins being the traditional fee you give to the boatman in order to be ferried across the river. Finally, the train is representative of the boat itself as a transport vessel that is more associated with carrying people in modern times. Of course, none of this is noted in the movie and the Bye Bye Man seems more interested in murder than ushering the dead but you take the fun you can get when you’re watching someone yell “this isn’t real” for the 10th time.

Score: 3 out of 5. As I said, this is pretty much an inoffensively stupid horror movie. It’s not something anyone should really seek out but then it also isn’t anything that requires particular avoidance either. It is for sure a film that was made.