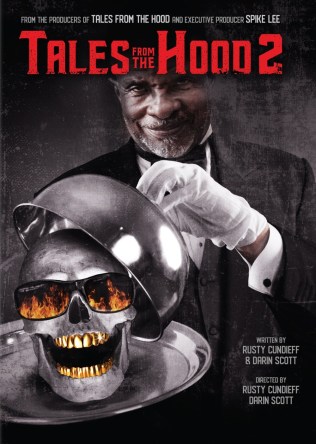 The original Tales from the Hood was over 20 years ago and is one that I’ve already reviewed and enjoyed. I was honestly surprised that they would make a sequel after such a long time but I was very much looking forward to watching this. With the passing of Clarence Williams III, the previous Mr. Simms/Satan, I wasn’t sure how they could replace him or if they would just do away with the framing structure entirely. When I saw that Keith David was in this, however, I knew immediately that the character was in good hands.

The framing structure has changed from the first movie in that now it is a private prison and policing company that has invited Mr. Simms to tell stories to their prototype learning robot. The owner of the company is Dumass Beach which I will give you a second to say out loud and hey, you got the joke. Really the framing narrative on this one was pretty bleh with Beach basically getting every horrible racist, misogynist, and nationalist stereotype rolled into one and the ending of the movie is pretty clear from word go. As I thought, though, Keith David does a great job in his role.

The first tale we get told is “Good Golly” where a white girl and her black best friend go to a museum about the racist history of America and the white girl just wants to buy a golliwog doll which is…Jesus Christ. Look up golliwog dolls if you don’t know what that is but it’s like going to the Holocaust Museum to ask if they have any copies of Mein Kampf. They break back in with the help of her brother that evening only to have the golliwog grow to human size and kill her friend and brother. She then embraces the doll and says she just wants to be with it. It then impregnates her and she dies months later after tons of golliwog dolls burst out of her stomach. There is a lot to unpack in this one and I’m probably not the best person to do so but goddamn, they came out the gate swinging.  4 out of 5

Story two is “The Medium”, which blends together two disparate groups. There are 3 robbers that want to get 5 million dollars from a former pimp turned philanthropist, Cliff, but they end up killing him. There is also a sham TV Psychic that pretends to speak to the dead but actually just has his audience bugged and takes notes before the show. They get the bright idea to use the psychic to get in touch with Cliff and hilarity ensures when he actually manages to channel the dead man for real. This one seems much more Tales from the Crypt and doesn’t really have a lesson beyond the standard comeuppance of bad people.  2 out of 5

The next story is “Date Night”. Two guys go to the house of a couple girls they met on Tinder while pretending to be an agent and casting director. After playing around some at the house, one of the guys spikes the girls’ drinks and they take them upstairs. When they plan to film themselves raping the girls, it seems the camera has a problem showing them and woopsy daisy, they are vampires. While the story itself is still one of comeuppance like the previous one, it also very clearly spells out afterward that these two were rapists and has Beach, our horrible opinion mouthpiece, spout off the “boys will be boys” rhetoric.  3.5 out of 5

Lastly we get one of the most directly preaching stories with “The Sacrifice”. This one juxtaposes a young Emmett Till (again, look it up if you don’t know) in 1955 with a current day black Republican. The entire thing is about honoring the sacrifices that those who have gone before have made and how without that sacrifice, things cannot get better. Definitely even more so than the first one, I am not exactly the ideal person to be judging this but I will say it felt a little heavy-handed. It was basically just a giant guilt trip for the main character and the audience but it does still have a reminder that sacrifice is needed even today to make things better.  3.5 out of 5

I was glad to see they got the original director back and there were several references to the first movie. This one felt like it had some more money behind it with better effects and also a much heavier subject matter than even its predecessor.