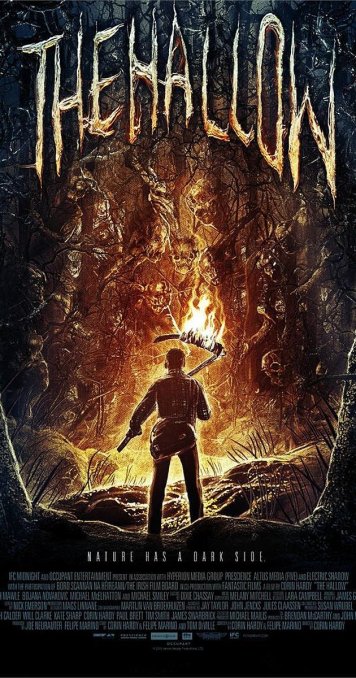 Since I was so up-in-arms over the Leprechaun movie from yesterday, I figured I’d keep on going with another film that’s about people getting murdered for having the temerity to be in Ireland. This time around it focuses more on the “don’t fuck with nature” theme rather than just being some random monster. I have to say that this is probably at least a touch more satisfying of a movie if you’re actually Irish since it’s English people that are getting the brunt of the terrorizing. It also leaves it wonderfully ambiguous about what the monsters actually are.

Adam and Clare are two young parents that have moved to a house in the Irish woods so that Adam can do a survey of the land for a logging company. They have to deal with their neighbor that wants them to leave and warns them to leave the woods alone. When they begin to have strange attacks on the house and their car, they blame him but it seems that something else sinister might be going on. Is it truly the fae that inhabit the woods that are angry at encroaching humans as the locals believe? Or is it simply a natural phenomenon that can be explained with science? Does it even matter when you’re being attacked by weird monsters?

I enjoyed that the film opens with immediately introducing the different options for what’s going on within the first couple scenes. Adam finds some weird type of cordycep growing in a deer in the woods, then we get the neighbor threatening them, and then we get his idea that the woods are full of angry fae. So we immediately get to start guessing on what’s “actually” going to happen in the movie. While it becomes apparent that it isn’t the neighbor doing it fairly quickly, the film doesn’t really let you figure out one way or the other for the remaining options. Every time it looks like it’s going to go with “it’s a weird fungal zombie thing” it immediately twists what’s happening to make it appear like there is some more than devious intelligence behind it than just mindless infection.

The movie does a good job of continually upping the action and the stakes. Which is no mean feat, since it had monsters assaulting their home while there was still a good hour or more left of runtime. The effects are good but oddly inconsistent. When Adam’s eye gets infected it has an awesome look to it once he takes the bandage off but then it doesn’t really bother doing it unless he is shown full face on. I also like that the movie established rules for its weird creatures and then actually stuck to them for the most part. Though it’s super weird to me that you have this plant based creature, whether fae or natural, and one of its big weaknesses is the sun. Maybe I shouldn’t stereotype plant monsters but I would figure being half plant would make you more inclined towards the sun rather than less. But what do I know?

I genuinely liked this movie even though I thought it was going to be some garbage when it first started. I was entertained and involved throughout the film. I’m giving it a 3.5 out of 5. Not exactly destined to be a classic or one that I’ll be recommending to everyone but still a fun watch.

Favorite thing in the movie: I love that when Clare goes to the neighbor for help he’s just like “Nope. Get the hell out of here. You done goofed and I want no part of it.”

Least favorite thing: Be sure to sit through the credits for a super special jump scare. You earned it.