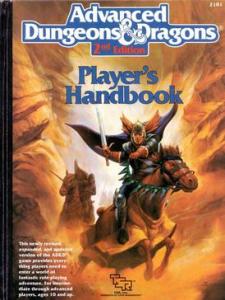 It’s our three year anniversary here at System Mastery!  Jon and Jef entered the bonds of holy podcastimony in August of 2013 and it’s been wonderful ever since, except for those times we’ve cheated with One Shot.  As per tradition, every 25 episodes it’s D&D time, and episode 75 is no exception as we take a long hard look at the classic 2nd edition of AD&D.  You know the one, it’s got all that bad blue art of nothing in particular and that weird picture of a giant fat guy looking at a tiny lady in his palm?  That one!  Enjoy!