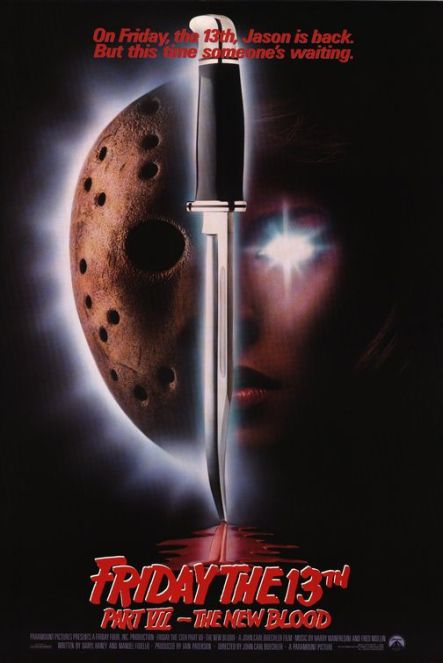 After yesterday’s venture into the worst that horror film has to offer, I needed something extremely light and easy for today. What could be easier than Jason Voorhees wandering around murdering promiscuous teens at his leisure. Only this time around it’s been seven movies and they apparently already hit the bottom of the barrel for ways to make the premise interesting. So this time around it’s Jason versus the low rent, generic brand version of Carrie.

The movie starts with a great narration of essentially “Last time on Friday the 13th” where they needed to fill the audience in on what happened in the previous movie. As if someone coming in to a Jason movie is going to be like “Whoa, whoa, whoa. Hold on. How the hell did Jason get at the bottom of this lake? I’m totally confused!” All anyone knows about the series is pretty much all you need to know; Jason Voorhees is an unkillable murder machine that really hates it when teenagers have premarital sex and do drugs but is cursed such that his very presence causes all teens in a 5 mile radius to crave sex and drugs as soon as possible.

Our main character is Tina, a telekinetic girl that killed her abusive father when she was a child by dropping him into a lake. She is apparently wracked with guilt by this and both her and her mother cry at one point about how they both miss him so much. Uhhh…ok. So her shrink decides the best way to cure her is to take her back to where it happened. Good old Crystal Lake! She then gets so angry at the doctor that she, I don’t know, telekinetically freaks out in the general direction of the lake so hard that it makes the chains holding Jason down snap. Also there just so happens to be a gaggle of sexy teens having a sexy party in the neighboring sexy cabin. I hear they are having sexy sex and doing sexy drugs. What a strange coincidence.

So Jason gets out of the lake and begins doing his level best to murder all the people. Then teens get exactly enough screen time to establish a character trait before being killed off. Well, most of them do. Some just get introduced and then killed immediately. I am unable to remember any of their names and don’t care to look them up but we have stoner, shitty writer, goober, preppy, gold digger, nerd, gives in to peer pressure, and Queen Bitch. Oh and love interest for the main character. He’s a total hunky dreamboat. Everyone except for Tina and Chunk Hardchin end up getting totally wrecked by the implacable force of nature that is Jason. This includes Tina’s mom and the doctor.

I’d give the movie a 2.5 out of 5 with it being about as predictable as you can be but still amusing to watch. Memorable Jason kills include stabbing someone in the eye with a party noisemaker and cutting someone in half with a razorsaw on a stick. I have no idea what the implement he was using is called but that’s what it was. Also, why is a supernaturally strong zombie using a machine?

Least favorite thing: Only one machete kill. For shame, movie.