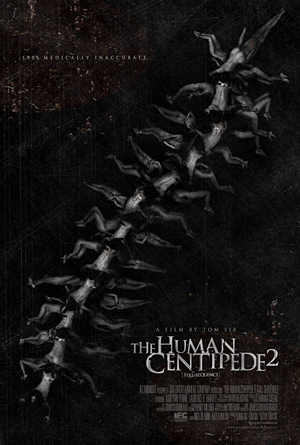 It’s the movie I’ve been dreading reviewing ever since I reviewed the first one. If you haven’t seen or heard of The Human Centipede, well you should go do something else and pretend you never clicked here. All I had heard about the second one was that it was essentially like the first Human Centipede but without all the restraint shown in that one. It’s written and directed by the same guy that did the first movie and I can’t even imagine what he was thinking when he did this. It honestly just feels like the entire film is him flipping off everyone that enjoyed his previous work.

The movie revolves around a character named Martin that is obsessed with the Human Centipede movie so much that he decides he is going to make his own 12 person centipede. Martin, however, is a far cry from the talkative Dr. Heiter from the first movie. Martin is a short, fat, sweaty, asthmatic, creepy, mentally handicapped mute that lives with his mother. This is apparently was writer/director Tom Six thinks of his fans. The representation of the biggest fan of his movie is pretty much the most disgusting and repulsive human you could imagine. Good job, Tom.

Also gone in this movie are the slick and clean experiences from the first movie. Where in the original you had the Doctor sedating people, performing surgery, and all done in a sterile environment; here we have people being knocked out with crowbars instead of anesthesia, slides up with kitchen knives instead of scalpels, and being put together with staples and duct tape instead of sutures and gauze. Everything Martin does is awful and, in fact, results in at least one person dying before he can even haphazardly attach them to someone. Even the whole shit-eating thing was done more tastefully in the first as in this one he injects them with laxatives because he is impatient for the pooping to start which then causes people to shit violently and it even hits the camera lens.

This whole movie is just terrible top to bottom with no real redeeming traits. You have the most unlikable and unrelatable protagonist ever presiding over a movie that has no goal or tension. There is nothing driving this movie forward except the perversions of a sick man. We don’t even know anything about the victims outside of the fact that he manages to kidnap one of the stars of the first film. We have no emotional investment in anyone or anything. The movie is like a slideshow of horrible images without any sort of narration. I love me some horror and I don’t even hate the “torture porn” genre with as much vitriol as some people do but, that being said, I can’t seem to find anything redeemable about this movie.

I give this a 0 out of 5. This barely qualifies as being a movie and may none of you have the misfortune of seeing this.

Favorite thing in the movie: It ended.

Least favorite thing: It was made.