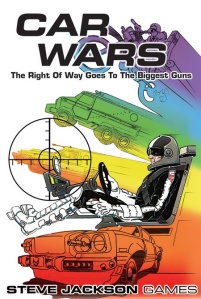 Strap in, it’s going to be a dense, chart-heavy ride.  Steve Jackson’s Car Wars is heavy on near-future apocalyptic flavor, and equally heavy on complex movement and combat rules.  It’s a battle of cars, bikes, trucks, trikes, trars, trike-trucks, truck-trikes, and for some reason, helicopters on this 80s-charged episode.

Let us know what you thought of Car Wars in the comments!  Have a book you’d us to cover?  Let us know about that too.

Editor’s correction:  Upon research, we have determined that Steve Jackson does not look like a Bruce Vilanche type, but rather like the sort of guy that designs beige pebble-plastic 80s computers that can run Oregon Trail.  We remain convinced that he is a cool dude, however.