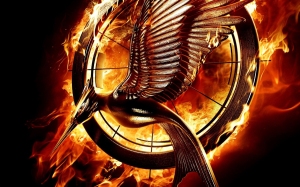 I haven’t read any of the books that go along with the Hunger Games series but I’ve heard a lot of people talking about the second book supposedly being the best one. While that may or may not be true, I can say that this installment of the trilogy was, for me at least, a vast improvement over the first film. While the superficial plot of the movie is almost exactly the same (Katniss and Peeta go back and compete in yet another Hunger Game) , the actual interactions the characters have with the setting and with the previously established characters becomes much more fore fronted. It is more about what it means to be a champion and what the games mean to society rather than being focused on the games themselves.

The acting really steps it up this time around. Jennifer Lawrence continues to be awesome but the rest of the cast all have better realized motivations and much more compelling interplay. You also get a far better group of competitors with the “returning champions” conceit. The original kids basically all blended together into “teens with weapons” for me with the exception of Rue since she had the distinction of being a little girl. This time at least you had not only these great distinctions among the winners with personalities based on how they earned their victory but you get a great split between those that beat the games and those that managed to survive. Also, since the audience and the characters already know the deal with what the games are and the background and everything, we can spend more time on developing relationships and setting.

One of the things I still enjoyed from the first movie and into this one is the style choices marking the difference between districts and capitol. The main difference is in the characters as the lens through which we view the differences. In the first movie, the heavily made-up, stylized look of those in the capitol is seemingly done as this show of grandeur and wealth that they have over the people in the districts as the tributes gawk and stare at these new things. The only problem is the style and look of the capitol citizens are ridiculous and silly which made the point of wealth vs. want feel a bit flat. However, with the characters returning and feeling as jaded and angry as they are, it makes the  goofy looks of the people more striking. Since the characters are no longer impressed with the wealth around them it makes the clownish look work better for the themes. Now they look more like a child that got into their mother’s make-up and decided to play dress-up. Especially with the competitors being older on average, you can see the childish nature of the citizens and come across much better than trying to show the appearance as mere opulence.

The action gets ramped up in this movie compared to the first one and also has a much more adversarial feel to it. The first movie was much more about the fighting children and standard wilderness survival type things. Here we see the people that run the games taking a much more active hand in the proceedings and it definitely ups the stakes from what it was. Of course this also feeds into the general shift of the movie into one of revolution against the system since now it is the environment of the games and the people running it that are the real danger and what they have to fight against. The angry animals in this were also much better done than the CGI super-dogs from the first movie.

Before I give the final score, I would just like to take a moment to mention Stanley Tucci’s role as Caesar Flickerman, the TV talk show host. I could honestly just watch him be that character for hours. He is the best cross section of the fake glamor of the capitol mixed with the genuine enthusiasm of an excited child. If he is in a scene, he is stealing it. So, final score for the movie is a 4 out of 5. I was left feeling like there was a lot of stuff that needed explaining but that I would need to read the book to understand so it tended to fail a bit on that but overall was a fun action movie with some real heart to it.