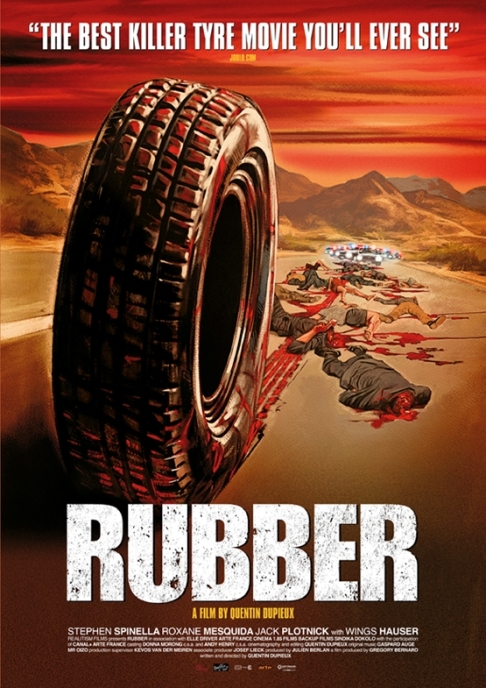 I have been wanting to watch this movie ever since I first heard about it a few years ago. It sounded just ridiculous enough that I figured they had to be very self-aware of what they were doing. Little did I know how right I was. The basic premise for Rubber is that a tire suddenly gains sentience and, along with it, psycho-kinetic powers. It then rolls around a small desert town using its psychic powers to kill everyone it comes into contact with. If that doesn’t pique your interest even a little, I don’t know what more you’re looking for (outside of realism, drama, and tension).

I kind of don’t want to get into anything that actually happens in the movie for fear of spoiling it. Right from the very start of the film, it lets you know that this isn’t going to be your standard schlock b-horror movie about a killer tire. What is originally delivered as a ludicrous premise then turns into a meta-textual look at the way in which audiences interact within the medium, whether it is audience interactions amongst themselves or the interactions they have with what they are watching. It goes into how much do we as audience members influence what we see and how much does what we see influence us. All of this and it still has the main plot of a tire blowing peoples’ heads up.

The movie starts with one of the characters giving a monologue to the camera about why certain things happen in movies and that it is all for “no reason” and that this movie is an homage to the “no reason” of life. The fourth well then turns out to be an actual audience that is there to watch a movie but the movie is just the desert that they are standing in and they are all given binoculars so that they can see what is going on. The audience comments on the pace of the film, gets annoyed with other audience members talking during it, and eventually goes right on down into the action to tell them exactly how they are doing it wrong and what would be a better choice.

I don’t even know if this is art or just stupid. It’s like watching a horror movie version of The Red Balloon but with a Greek chorus in the background giving commentary. The movie really goes into what we, as viewers, are willing to accept in order to get our entertainment. Do we forgive slow and boring parts just because it’s the start and hey, it must get better from here? Do we stick with a movie that we think is dumb just because we have already invested time into watching it for a while? Are we willing to put up with a movie that seems to actively have disdain for its audience and seemingly wants them to be sick or leave? Do we as horror movie watchers end up sitting through what would otherwise be a terrible movie just for the gore?

I honestly think that this is one of the more amusing and fun movies I’ve seen in a while. It is very much aimed at someone like me that watches horror movies and is always looking for the deeper meaning and what is really happening. However, I will say that it is definitely not going to be for everyone and probably not something you would watch with a group of friends unless you really like being an asshole to your friends just to see their reactions. It’s like going to see one of those comedians that other comedians adore but audiences don’t really get like Gilbert Gottfried. I give this movie a 4.5 out of 5 and I am fully ready to receive people telling me I am actually insane.