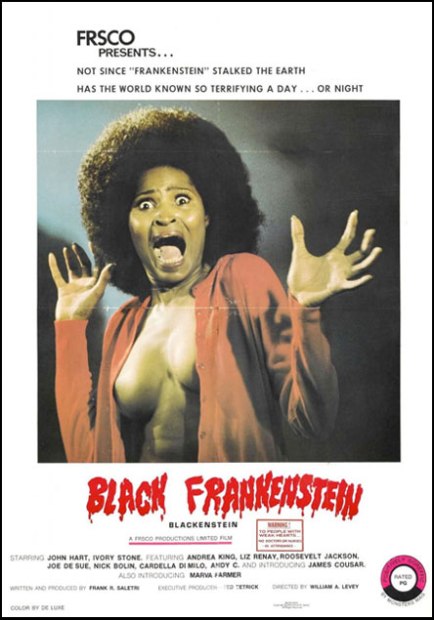 Today marks the start of the “Urban” horror week where we take a look at movies that aren’t all about white people. This movie takes place right in the heart of the Blaxploitation movement that was happening in the early 70’s. With the earlier success of Blacula, it seemed only logical that they would move on to another classic horror monster. Blackenstein is the story of Eddie, a black Vietnam veteran that stepped on a landmine and lost his arms and legs. His wife, Winifred, studied under a Dr. Stein that has been working on a technique to graft new limbs to people. When Dr. Stein’s assistant Malcomb jealously sabotages the formula to help Eddie regain the use of his new limbs, he creates a monster that terrorizes the neighborhood by night.

This movie ends up feeling really strange for being a Blaxploitation film. Normally, those films featured either a focus on the poor neighborhoods where people were trying to get by or, if set in the South, were more about the issues of slavery and race relations. Here, the movie doesn’t really focus on anything you would normally associate with those types of films and actually seems to be fairly regressive as far as the race issue goes. You have basically every black character subservient to a white one in some way. Winifred and Malcomb both assist Dr. Stein, a white guy. There are two police offers with a white Captain and a black Lieutenant. Eddie himself is either a neutered sack that can’t help himself without a white orderly to do things for him or a monster that attacks anything without reason.

It also feels like a lot of missed opportunity for them to do something with the plot. The fact that he was a veteran was only really mentioned at the start. The orderly both mocks and seems jealous of Eddie and says he was denied from enlisting in the army but that doing so is stupid patriotism and now his tax dollars are paying for Eddie’s treatment. With the anti-war sentiment and the cold return that veterans of that war received, the idea of “veteran as monster” would have been an interesting space to work within. Sadly the entire vet angle was pretty much dropped almost immediately after the start of the movie.

At first I thought that they were going to go with it being something like the horror a black man attacking white people. When Eddie becomes the monster he actually ends up with more of an afro and the first people he attacks are white folks. That sort of falls apart as not only does he then just start killing indiscriminately and the writers also seem to conflate Frankenstein’s monster with a zombie as he ends up eating the guts of a couple of the people he kills. Speaking of Frankenstein’s monster, I was also pretty disappointed in that there were no references to the original James Whale version (no child, no mob, not even any fire). The movie seems to have a lot of creative space and it could have taken it in a number of directions but just seems to flounder without really knowing what it wants to do.

The movie also suffers/benefits from that early 70’s film charm of grainy film quality and terrible sound. Dr. Stein’s lab actually has the sound effects from Star Trek in one of the scenes. It also has some very sudden and seemingly random cuts to the next scene. The acting is also bad, which you would expect from a B movie like this, but it’s bad in that most of the actors just seem bored. The men in particular just drawl in a monotone and nobody really develops throughout. One of the most hilarious scenes is Malcomb saying that he is in love with Winifred in the most dull, monotone imaginable and her reacting with “I like you, of course, how couldn’t I?” and I’m just sitting there going “Because he is as interesting as a plank of wood?”

I give this movie a 1.5 out of 5. I really wish that this had been done by a writer and/or director that were a little more focused and talented. You can see some small nuggets of what could have been but overall just a boring disappointment. Also, one of the most random, anti-climactic endings I’ve seen.