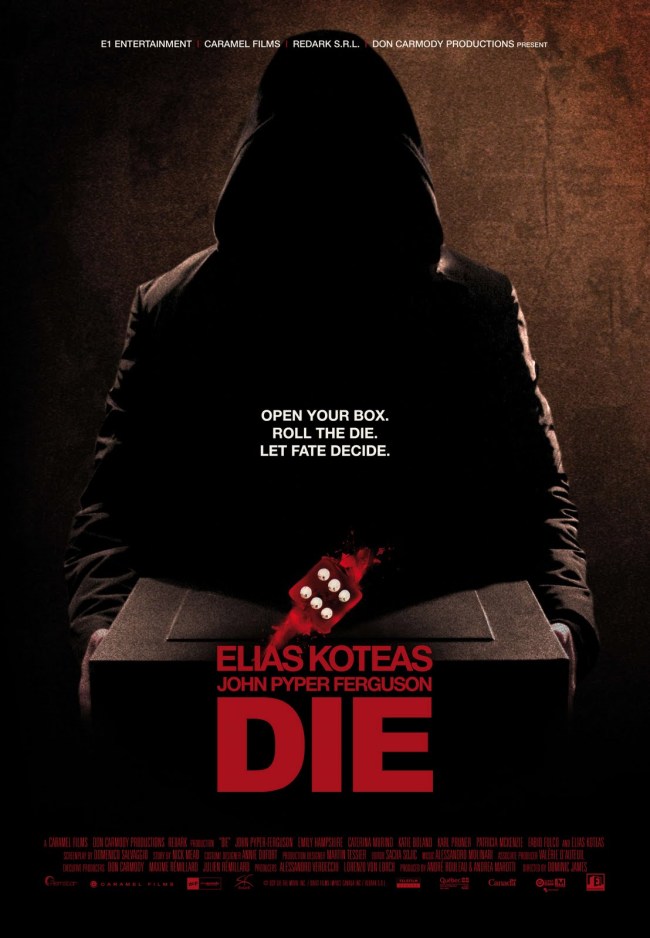 I’ll be honest, the only reason I picked this movie was because I’m a huge gamer nerd and the idea of a dice based horror movie appealed to that side of me. The idea of some guy having a “random encounter table of horror” just tickled me. Sadly, the actual movie was far less entertaining and certainly less amusing. Die is the story of six strangers that end up waking up in a strange prison. The only thing they have in common is that each of them attempted suicide at one point. Now they are forced to put their lives up to chance and the roll of a die.

The whole movie is split into six parts and there are six strangers just like the six sides of a die. The movie starts out being at least fairly clever about the number thing. In “One” we are introduced to each of the individual characters. We have them shown as being alone, even when around other people. “Two” starts and we see that the captives are put two to a room and the game is played with two people; one person is the victim and one rolls the die to determine their fate. “Three” has a roll of a 3 and we are shown that he brands his prisoners and one of the detectives was on a case with someone branded 3. “Four” has 4 people left, a roll of 4. and the backstory of the prisoner branded 4.  Then oddly “Five” and “Six” just sort of give up on the number conventions and continue with the plot. It’s sort of weird to sit there looking for the number connections and then just left hanging for the last ones.

I found it very odd that you don’t get a lot of people really freaking out which is so prevalent in the “captive” horror movies. Usually someone is screaming for help or cussing out the captor and so on. Here the people seem almost passive about the situation and nobody even attempts to get away for fight back until the very end. While the actors themselves do a fine job, and there are several recognizable character actors here, the reactions of most of the people just feel very weird and perhaps a bit too subdued given the situation they are put in. That said, the captor himself is unlike most of the captors you see in that, while he does kill and does play games with his prisoners, he is doing so trying to save people from their own person prisons of addiction, depression or what have you.

The theme of leaving your life up to a die roll also intrigued me because I love the book The Dice Man which deals with exactly that. A man decides to leave his life’s decisions up to chance by coming up with multiple options and then rolling to see what he will do. I feel like the person who wrote this movie had finished reading that book and then tried to incorporate it into a movie where it didn’t belong. The main villain has written a book that is apparently touts a philosophy of giving your life over to the die but it is never delved into or fleshed out beyond that it has some weird cult following and that his victims that survive the trials end up feeling grateful for some reason. I actually feel like the conceit of the movie worked against it because what could have been done with the idea is for more interesting than what was actually done.

In all, the movie just didn’t really wow me. It wasn’t really bad or anything but it also didn’t really end up being very gripping. Considering the start of the movie wants to introduce six different people with different stories you don’t end up with anything particularly interesting aside from “these people are kind of unhappy” but it doesn’t linger on any of them long enough to maybe start caring. I’d give the movie a 2.5 out of 5. Fairly middle of the road and ultimately skippable.