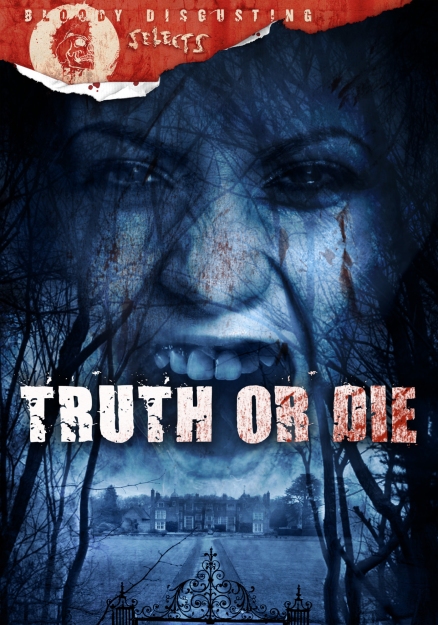 The title of this film originally led me to believe that this would be a standard, paint-by-numbers type horror film.  Even the small blurb about it on Netflix makes it sound like it will be more of the same we’ve seen before where sexy people have a party in the woods and then someone ends up torturing/murdering them. The beginning of the film has that same vibe as well as we start right in at a costume party where drinking, drug use and sex are combining to make the horror cocktail we all know and love. However, the movie takes a bit of a turn on the expected and even has some commentary on several things.

The plot starts out fairly simple at a graduation party with Felix, the outcast, being infatuated with the “nice, pretty blonde” Gemma that has a douchebag boyfriend, Chris. When a game of Truth or Dare ends up revealing this, Chris mocks him and punches him, sending Felix running from the party. Fast forward six months later and they are headed out to the countryside with several friends in tow for Felix’s birthday since he is loaded and they are in it for the free booze. Now, what might have become a standard revenge fantasy type horror movie ends up getting changed around as Felix is nowhere to be found and his brother welcomes them to the cabin. I’ll leave the rest of the plot mostly unspoiled as I think it really benefits from not knowing too much about what is going on.

The acting in this was good with just enough over-the-top scene stealing from various actors to really make you pay attention. Disclaimer, this movie is British and I always feel weird talking about the acting in any foreign film even if it is in English. I think we become so used to how we speak and act that it’s much easier to spot someone being fake when they are from your country. Regardless, the direction in this was also very well done with most of the scene’s being split into two things which plays into the duality that this movie is obsessed with. Truth or Dare, strength or weakness, left or right, inside or outside, straight or gay. All of these aspects get shown in the movie with the duality being shown most in a couple areas.

One of the main concepts that is continually brought up is having power or not and the insanity that that disparity can bring. Justin, the brother, has the power over the group but that isn’t where it stops. Just also ends up basically recruiting one of the friends to be his helper in this and through making him have power of the others, he ends up being frozen and indecisive about helping his friends. Towards the end of the film, one of the friends gains the upper hand and you see them start to have that same sort of insane glimmer in their eye now that they are the one in charge. This also ties into the idea of wealth and poverty since Felix is from a very wealthy family and several characters can’t understand why he would be upset being from such high class circumstances.

Truth or Die also delves into the concept of sexuality and, more specifically, the shaming of anything outside the norm. Justin is often shown talking about not “acting like a fag” or “being such a queer” as he tortures people. He equates being gay with being weak but we also see the double standard as he says nothing when during a round of Truth or Dare at the start, Gemma and her friend Eleanor share a kiss as a dare. While these are horrible things, the movie makes sure that these are mostly shown as the ideals of an insane asshole. I think the movie could have actually done more and handled the issue better but it was certainly good to see it at least brought up.

In all, I think this was a very enjoyable film. The characters are surprisingly nuanced for this type of movie with actual motivations and interesting reactions. I can see how a lot of what this movie deal with could be hot or miss with some people but I give this a 4 out of 5 and would recommend you give it a watch and see how you feel about it.