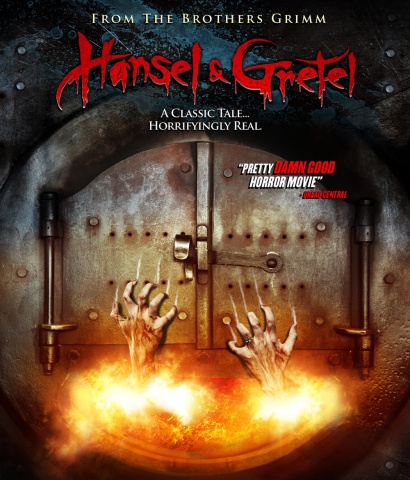 Right off, let’s just go ahead and put to rest any confusion.  This is not the Hansel and Gretel movie with Jeremy Renner where they hunt sexy witches.  This is a modern retelling of the classic tale of the siblings that get lost in the woods and trapped by an evil witch.  Another thing to note, this is a movie by famed “mockbuster” makers, The Asylum, who have given us such gems as Transmorphers, Snakes on a Train, and Alien vs Hunter.  I reviewed their movie Paranormal Entity for Horrortoberfest last year and, if you didn’t read that review, let’s just say I damn near turned the movie off right when the opening credits told me it was by them.  I am oddly glad, however, that I managed to control my bile and sit through this.  Any time I can look at my notebook after watching a movie and see the phrase “gleeful autocannibalism drug trip”, I know I’ve made a wise choice in movie.

This movie gives is entirely unashamed of what it is.  It revels in it and wants to get right to it as fast as possible.  The movie opens with a captive girl being killed and cooked, then opening credits, and then it takes us to candy shop The Gingerbread House where an old lady sells the sheriff one of her World Famous Meat Pies.  You might think this is a fake out and that the real threat is somewhere else.  You would be wrong.  “Fuck you”, says this movie, “I don’t have time for red herrings.  I got shit to do.”  We are then introduced to Gretel, who dutifully works at the shop, and Hansel, a slacker, gamer and skateboarder.  Like every other movie this week, we have a step-mother! This pisses off Hansel so he runs into the woods and you know what, I don’t even care about the plot and neither does the movie.  It spends about 15 minutes on set up and then another hour and 15 glorifying in stupid b-horror blood and guts.

As mentioned in earlier reviews, every fairy tale is obsessed with mother issues and this is no different.  Lilith, the store owner and witch, tries to convince Gretel to join her and be her child and eat people and everything the light touches will be yours, Simba.  All she has to do is kill and eat her brother.  Sweet deal! (Ha! Pun. Sweet.  Gingerbread house.)  Even a side character of one of the other captive teens in the basement has parent issues in this where, during the aforementioned drug trip scene, she goes through a metaphorical maze of cutting wires while her father tells her she is worthless.  The payoff for this intricate symbolism?  In the very next scene she is stabbed by one of the witches inbred sons!  No moral!  I don’t why this movie fucking with the audience makes me so delighted but it does.  Also, it should be noted that the drug trip scene is caused by exposure to gas and the trip lasts approximately a minute and then stops.  It has no bearing on film, they just wanted to film some weird shit.

The actress they got to play Lilith, Dee Wallace, is having the time of her life during all of this.  She just gets to go progressively crazier as the film goes on until she is shoving as much scenery into her gaping maw as possible whenever she is on camera.  When the deputy finds her and questions her about the missing kids, she kills him.  Later, when the sheriff is coming to rescue, she kills him with a bow and arrow.  Not content to let the joke pass by Gretel tells her “You won’t get away with this.  You shot the sheriff.”  “Yeah, well, I also killed the deputy.”  Also, when one of the implacable inbred children is chasing them and he is shot we also get Gretel asking Hansel, “Is he dead?” To which he responds, “Of COURSE he’s not dead.”, and sure enough he starts to move.

I have to note, one of the girls was taken to be prepared to be cooked at one point. She is stripped to her underwear and the son that is preparing her just looks at her.  I wrote down immediately “Viewing women as a piece of meat. Ha. I get it.”  The movie anticipated this apparently and the next time we see her she is hanging by her wrists and is being used for boxing practice like a slab of beef in Rocky.  I don’t know if anyone else would appreciate this movie the way I do but I am giving this movie 3.5 out of 5.  I desperately wanted to go as high as 4 but I want to retain at least a semblance of having taste.