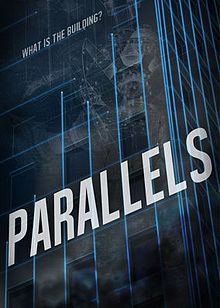 Anyone who knows me knows that I love alternate reality stories in whatever medium I can find it. Hell, I own the entire series of Sliders even though that show turned into a roaring dumpster fire of bad ideas sometime around the end of season 2. You can imagine how excited I was to see that there was a movie that took that same basic premise of jumping around to alternate earths only this time it was keyed into a huge office building that is apparently a universal constant regardless of what reality you jump to. Unfortunately, this didn’t really end up being a movie so much as a very well done TV pilot.

Our story follows a brother and sister, Ronan and Beatrix, looking for what happened to their father after he went missing. Their only clue was a weird voicemail that told them to go to a building downtown. They are joined by their childhood neighbor, Harold, who has a stupidly obsessive crush on Beatrix. When they get into the abandoned office building, lights and sirens start to go off and the doors wont open. When it finishes, they find themselves opening the doors out onto the apocalyptic wasteland of an alternate earth. Hijinks ensue and now they have to jump from place to place while trying to find either their home planet or the mysterious Earth 1, where the building is said to have originated.

Let me just say, this “movie” would have made me so angry if I hadn’t been watching it on Netflix. Every loose end that gets shown is just dropped like it would be dealt with in a following episode. Except this isn’t a show. For example, they find a macguffin in their dad’s car that’s some weird orb of unknown tech and it is not only never explained beyond possibly coming from Earth 1 but it never even does anything. They find a girl in the building from some other earth only there are more than one of her in there and nope, never comes up. The end of the movie is them getting a way to control how/where the building jumps between realities and then walking out to some unknown place. So now I’m left with either a movie that fails at being a narrative entirely or a TV pilot for a show that doesn’t and probably wont exist. Great.

Even if I was looking at it as a TV pilot, there are still some things that are kinda stupid. The main characters are Ronan and his manpain. Also, his backstory is he failed his family and so decided to leave them and wander alone. Ronan. Get it? Another thing that is more amusing than terrible is that the character of Harold is played by Eric Jungmann and he also played the obsessed best friend with a crush in Not Another Teen Movie and it tickled me that he was relegated to being the Ducky of any movie he is in. Additionally, there is graffiti all over the building inside about how “Earths 18, 25, and 132 are dead” or “Earth 48 has friendly locals” like some kind of hobo code for transdimensional travelers. Except until the end of the movie there was no way to control where it went, it just auto jumped every 36 hours, and there would be no way to catalog where you went. Also with possibly infinite numbers of alternate earths, trying to number them seems a bit futile.

While I’m not even sure I can rate this like other movies I’ve watched I’m going to anyway because we’ve already gotten this far. As a movie, I give this a 2 out of 5 for being the biggest case of blue balls and failure to use checkov’s gun. As a TV pilot I give it a 4 out of 5 and I don’t care about how stupid it is I just want another show about reality hopping.

Favorite thing: Harold fucks over the life of an alternate universe Harold that has it way better than him out of petty spite.

Least favorite thing: Just use the goddamn macguffin! Come on!