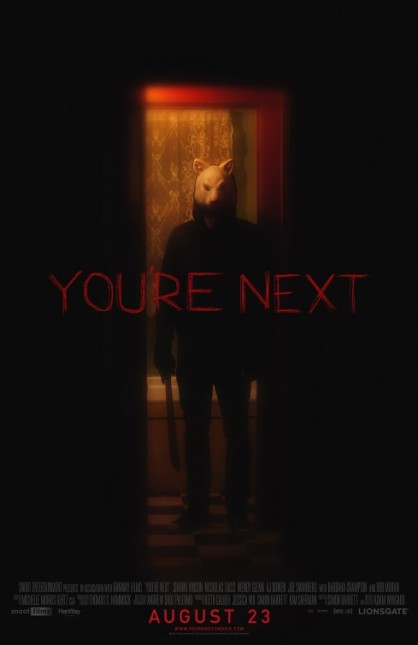 I kept hearing all of these good things about You’re Next and I could never understand it. I mean, sure, you can have a really creepy home invasion style horror movie but it’s been done so much. And it wasn’t just horror fans that were saying it was great; actual film critics were also talking about how it was so good. So, even though that style of horror usually isn’t my favorite, I figured I should give it a chance. I am so glad I did. This movie takes the normal tropes and clichés of the home invasion films and tweaks them to be supremely entertaining.

The movie is incredibly intelligent and self-aware without constantly trying to remind you of how intelligent and self-aware it is. It starts out with a classic horror movie prologue with a masked person killing off a half-naked girl and her boyfriend right after having sex which sets up the expectation for the film. We then get introduced to the Davison family and their various significant others. If you took away the whole masked murderers thing, this would play out as your typical family dramedy. The parents and each sibling are introduced and immediately given small scenes to really showcase their personality and the tensions they would have with everyone else. From the passive-aggressive asshole older brother to the super chipper princess sister or the brooding, dark younger brother.

You’re Next is so good because it has these characters that end up not just being walking archetypes but they pretty much all get their own moments to really shine. It also has such a great wealth of humor that comes from this. When Drake, the older brother, cannot help but be a condescending prick to his brother as they argue over who could run faster even as he has a crossbow bolt sticking out of his back; it’s so incredibly surreal and hilarious. Even the killers end up getting developed with little quirks and are shown to be human. Like a scene where one of them, after chasing and killing one of the family members, tiredly sits down on a couch next to a corpse and listens to some music for a minute.

The movie also has one of the best “last girl” characters in any horror film. She isn’t weepy or frightened. She isn’t the virgin or the innocent one. She is a strong, smart, capable character that responds to threats the way we always yell at the screen for characters to do. It’s also interesting to note that the gore and violence in the film, while ample, is not particularly graphic unless it is done from the hands of one of the survivors. The deaths from the masked killers are quick, not generally shown in detail, and very detached. The violence from those inside, however, tends to be more upfront and brutal showing the difference between the cold distant attacks from the masked and the hot, desperate violence of those being hunted.

I have to give the movie a 5 out of 5. It has great tension, scares and humor all rolled up. Even the weakest bits of it (the opening prologue piece) aren’t that bad since they are so true to the style that they are trying to emulate.

Favorite thing in the movie: The final confrontation in the film had me literally laughing out loud at the screen. It was amazing.

Least favorite thing: Not being able to talk about the spoilery bits because I want people to go into it without knowing much.