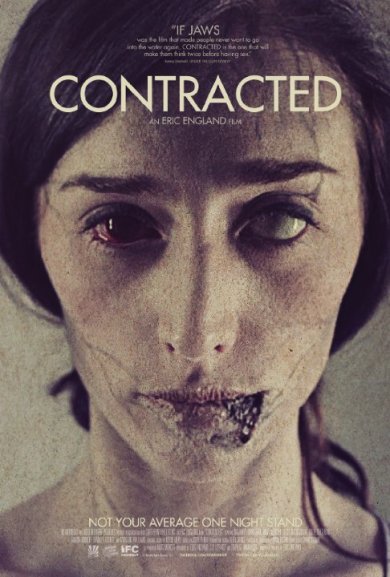 This movie has been sitting in my queue since I first saw it but I had yet to get to a point where I actually wanted to watch it. The idea of what was quite obviously going to be a zombie plague being made out as an STD seemed really interesting and yet unappealing at the same time. I didn’t think that the makers of the movie might have originally started out trying to have some sort of message but it feels like it gets lost along the way. If nothing else, it does at least do a good job of making you definitely want to practice safe sex.

The movie starts in the classiest way possible; a guy has sex with a corpse. We then cut to a party where our heroine, Samantha, has just arrived. After getting a bit drunk, the corpse fucker from earlier ends up slipping her something in a drink and, well, proceeds to rape her. As she wakes up the next day, she slowly begins to get sick and is originally diagnosed with an STD because her doctor is just one of a cavalcade of big, dumb idiots that crowd this film. As the disease begins to escalate, so too does Samantha’s reactions to what is happening in her life. In what will be a surprise to literally nobody, she becomes a zombie.

I really wanted to be on Sam’s side in this movie. She was the victim of a horrible act and the repercussions of that would start to destroy her life in ways that weren’t her fault. As a metaphor for the way being unable to talk about sexual assault can have terrible and long lasting effects, it does a pretty good job. As a narrative that is in any way believable, however, it ends up relying on literally everyone to be pants-on-head stupid. If I’m vomiting blood and have a black veiny rash, my ass is in the hospital immediately. I’m not going to work, trying to patch things up with my ex, or visiting my local family physician. When shit gets to the point where my fingernails are coming off and one of my eyes has gone entirely white; I am punching orderlies until somebody does something. Also, if I see that happening to someone else, I’m driving them to emergency care instead of accusing them of drug use.

We also don’t really get any scenes or flashbacks to what has happened, though the movie gives us clues and hints that Sam used to be on drugs and has probably attempted suicide in the past. This subtle storytelling that goes on in the background ends up being much better than the actual storytelling done. The make-up and effects for this are quite good at being unsettling. The slow transition Samantha makes from beautiful woman to zombie is very well done. Little things also make the process a lot more repulsive, such as a maggot falling from her vagina at one point. Nothing like the idea of that to make anyone uncomfortable.

I think I’m going to give this movie a 3 out of 5. The acting isn’t terrible and the plot as metaphor is well done, as I said. I just wish the plot as plot turned out a bit better.

Favorite thing in the movie: Going in for a shift at work when you are shooting blood out of both ends and your hair is falling out.

Least favorite thing: Literally nobody suggesting she go to the hospital.