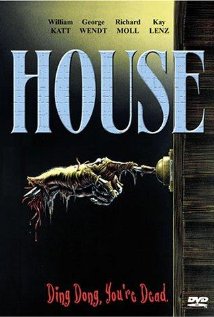 I almost broke my rule about only watching movies I haven’t seen before with this one. House is the first horror movie I ever saw but never watched the whole thing. I think I was 5 when some family members were watching this and I got freaked out by it. Since I couldn’t remember more than a single scene from it, I figured I’d go back and give it an actual watch with an adult perspective on it. Turns out that things seem way scarier when you are a little kid. Also I had no idea what Vietnam was so I kind of missed out on that whole thing in the movie.

Our protagonist in this movie is Robert Cobb. He’s a Vietnam vet and horror writer that got divorced when his kid went missing an indeterminate amount of time ago. He inherits his aunt’s house after she kills herself in it but then it turns out he used to live there as a kid and maybe his family did too? At least his kid went missing while they were at the house. Anyway, he is trying to write a book about his experiences in Vietnam while also doing his best to try to deal with what is clearly an evil house and get his kid back. Also, George Wendt is his neighbor and that doesn’t really have anything to do with the plot but he George Wendt is awesome and so it bears mentioning.

As with pretty much anything that has a veteran as the main character, the movie is more about him coming to grips with his own past deeds that haunt him than it is dealing with the actual ghosts that are haunting him. We get several flashbacks to when he was in the war and his experience and each one is then followed by the house doing something evil/creepy. If it wasn’t for the fact that at least one other character corroborates the fact that there is some shit going on in the house, you could very easily assume that all of the supernatural activity was just some PTSD manifesting itself. Of course the only way to get his family back is to confront the literal ghost of his failure in the war.

For what I’ve been describing, you’d think the tone of the film would be fairly dark or at least pensive seeing as it deals with suicide, war, loss of family, and so on. Instead the film ends up shifting back and forth as to how it wants to present things. One of the actual good scares is a monster that represents Robert’s wife but then the movie starts playing some up-beat oldies when he tries to bury it and has some slapstick “the hand keeps moving” scenes. I suppose it’s a product of the 80s horror films since you so often see that comedic, non-serious undertone in most of them. Still, the movie ends up erring a little hard on the goofy side than the actual horror side.

I’d give this movie a 3 out of 5 if only for nostalgia’s sake. I don’t know that most modern viewers would care much about the constant, shitty Vietnam flashback scenes.

Favorite thing in the movie: George Wendt, the shlubby nobody neighbor, is concerned for Robert and manages to get ahold of his ex-wife on the phone who happens to be a fairly big time actress.