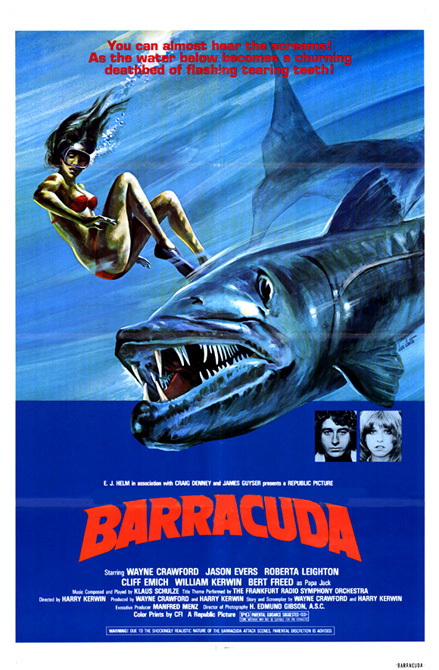 I’ll be honest, half the reason I picked Barracuda for the week’s animal attack theme was because as soon as I saw it I couldn’t get that Heart song out of my head. The fact that there is a good song by the same name as this movie is also probably the most interesting thing that one could say about Barracuda. I’m really glad that most filmmakers learned from the mistakes that the 70’s gave us and no longer have overly long segments of people driving around while nothing happens.

So the movie has almost no dialogue for about the first 8 minutes or so. First we get some divers swimming around that then get attacked after a couple minutes. I’ll give the movie credit, the barracuda don’t get any weird animal noise sound effects. In fact, there are basically no sound effects. Throughout the movie everyone that dies does so with effectively just background music going. It’s almost serene. Anyway, that scene is then followed by suspicious business men checking out of/into a hotel and then driving and then looking at each other and then more driving. God damn, this movie is slow and boring.

Then we get introduced to the hero of the film, a marine biology student that wants to expose the waste dumping by the local chemical plant. The other hero is the sheriff that just wants to help. I’ll give the movie some credit, it does have some background establishing stuff with people in the town acting weird and aggressive. It also has the student being super rational about the chances of pollution making fish go crazy is super low. Now, I am going to spoil the big reveal of the movie here so if you like watching really horrible, boring movies then, you know, spoiler alert or something.

So the big bad is actually the government. They are just using the chemical plant to manufacture their weird drugs. And you want to know what those drugs do? They make you hypoglycemic which makes you all hangry. The town doctor was giving it out to people as an experiment. That is also what was happening to the fish because runoff. No mutant barracuda or anything. The chemicals just made them hungry. It’s not the animals fault, maaaan, it’s the government. They were specifically making drugs that would make people aggressive so that they could, wait for it, stop war protestors by making them all super angry so we as a people would want to go to war.

It’s a big old hippy movie wrapped up in the semblance of a horror film. It hits all the right notes. The earth is being polluted, doctors are trying to poison you with their unnatural remedies, the government is secretly trying to control us, and it’s all so we can make more wars. In addition to the stupid plot, the movie also has the worst sound production. They didn’t want any background noise for some reason but instead of redubbing the lines, they just keep cutting back and forth between the recorded dialogue and the mostly silent background. So you have a motor running in the background that only becomes audible when someone talks. It’s this headache inducing back and forth of sound levels and I have no idea why they would do that.

I’d give the movie a 1.5 out of 5 because it’s just soooo boring. Everything takes forever to happen and when things do happen, even that isn’t super interesting. There are some clever ideas that play with the expectations that Jaws had set up but, sweet Jeebus, it has the pacing of a snail. Or maybe a slug. CALL BACK!

Favorite thing in the movie: The government totally wins and kills everyone.

Least favorite thing: It takes them an hour and a half to do so.