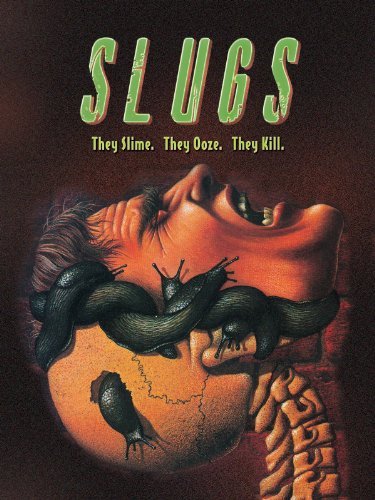 Time to start this Horrortoberfest off with an incredible slow, ridiculous bang. Slugs is one of those films where I can only imagine the reason the movie got made was someone came into possession of a huge amount of slugs and couldn’t think of anything else to do with them. This will take its place with classics like Frogs and Night of the Lepus in the category of “movies about animals that are in no way actually scary.”

They apparently wanted to get right into the action as the movie immediately starts with someone dying while fishing. It hits all the clichés, too, with him getting tugged and then pulled under while his girlfriend tells him to stop playing around and also she is in her under for some reason. This lake and death will not be mentioned in the movie. Oh, the beginning credits also show the title as Slugs The Movie just in case you might have gotten it confused with the Slugs tv show or Slugs! the broadway musical.

The main hero of our movie is a guy that works for the Health Department. Which is weird because his buddy that also helps works for Sanitation and you’d think the guy that works in the sewer would be a more likely hero but whatever. The movie even acknowledges that there is no reason for him to get called into situations since it has nothing to do with his department. I guess they were just really tickled by the idea of a Health Department hero? Aside from those two there is also a British(?) chemist(?) that they go to for advice on slugs since apparently being a scientist of any kind means you are an expert on all the science. Also a bunch of side characters that do nothing but fill time with stupid crap and only some of them die.

The slugs themselves don’t do much. The movie really wants to be like Slither but the effects for that didn’t really exist at the time and, even if they did, these guys wouldn’t exactly be able to afford them. Fun side note, whenever they do a close up of the slugs they have to play some noise because a scary close up of some slugs just slugging around wouldn’t be impressive. The noise a group of slugs makes is akin to the sound of when you stir a big bowl of mac and cheese. Anyway, there is precisely one scene where we see a slug actually bite someone but that blew the budget because the rest of movie shows them just existing….menacingly.

The very best part of the movie is the sound. Being a crappy, old 80s movie; most of the dialogue was dubbed in later with only a smattering of scenes where it seems like they took the original voices. Better than that, though, is the soundtrack of inappropriate but still free music. You’d get things like the sheriff and the main character driving to check out a house while music that belong in a 3M infomercial plays. There is a scene where tense, drum heavy music like you would hear while the hero is chasing the villain plays while the characters get into their cars and then slowly back out from a warehouse. It’s amazing.

In all the movie was pretty bad but, then, of course it was going to be bad. It’s a horror movie about slugs. I’d give the movie a 2.5 out of 5 and figure it would be a fun thing to have on in the background of a Halloween party since nobody needs to pay attention to it.

Favorite thing in the movie: The exchange: “I’ll declare a state of emergency!” “You don’t have the authority to declare Happy Birthday.”

Least favorite thing: It takes place during Halloween but it is only mentioned twice and there is precisely one pumpkin in the movie. Come on, man. That’s a waste of a setting.