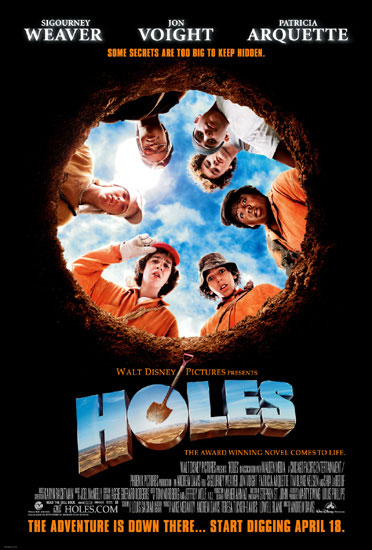 Going into this film, the only thing I knew about it was that it was the first thing Shia LeBeouf had done. I know it was based on a book but that came out when I was already too old for the target audience so all I knew about it was the incredibly piss poor marketing campaign that accompanied it. To be honest, I thought there were going to be aliens or some sort of magical fantasy aspects to why they had kids out digging holes in the desert. Turns out the reason for the child labor is actually because America is a really racist place.

The general plot of the movie is that Stanley Yelnats (yes, his name is a palindrome) gets caught with a pair of stolen shoes that fell from the sky and he gets sent to a “rehabilitation camp” where the kids are forced to dig holes all day in order to “build character”. We then get the background of the Yelnats family and the story of what happened at the camp before it became a penal facility. Long story short, the Yelnats’ are cursed because their great great grandfather didn’t help old Madam Zeroni after she had helped him in trying to win the girl he loved. The camp Is cursed because the town killed a black man after he and a white woman shared a kiss (this also spurred her to become a vigilante outlaw that left a lipstick kiss on those she killed). The stories of these people (the Yelnats’, Madame Zeroni, and the outlaw Kate Barlow) all intertwine.

I was amazed at the level of violence, morbidity and heavy themes that were present in what was a PG movie aimed at kids. The movie opens with one of the prisoners walking towards a rattlesnake in the desert just so he can escape heat and exhaustion from digging all day. So we start with a suicide attempt, then get the story of a lynching, and eventually end with another suicide. We get little glimpses of the other characters and why they are there with throw away lines like “Yeah and maybe my mom will stop drinking” where you see that these kids aren’t just here by accident like Stanley. Many come from broken homes or, in the case of Zero, are completely homeless. For being a Disney movie, there is some seriously dark stuff going on in here.

The messages of the movie are good but honestly end up being told pretty confusingly. The first half or so of the movie is constant flashbacks to different things at different times and it feels really sloppily put together. We shift to Stanley’s home, to the prison, to the camp how it was, to Stanley’s great great grandfather, to Stanley’s grandfather, to Kate Barlow and so on. While not terribly hard to follow, it does make the movie seem like a complete jumble without rhyme or reason. You do end up getting all of the threads tied together at the end but it feels less satisfying since the way it was presented originally was such a garbled mess. I haven’t really mentioned it but the acting was actually quite good. I was surprised to find Sigourney Weaver and John Voight as main villains and they didn’t even phone it in. Most surprising is that I didn’t hate the child actors they got and even liked most of their performances.

In all, I’d say the movie was really ambitious in the subject material it was tackling and managed to not entirely sugar coat over the truly horrible things. It being from the perspective of Shia LeBeouf didn’t do it many favors but that might just be current bias seeping in. I give the movie a 3.5 out of 5 and applaud it for trying to do more than your regular kid’s movie.