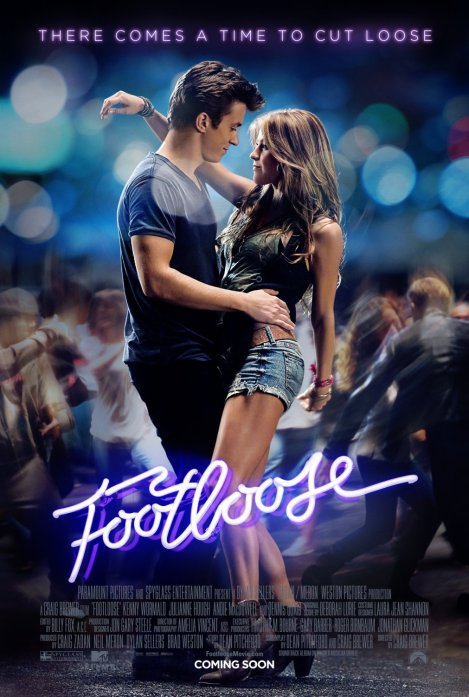 I know it seems like I’ve been on a remake and sequel kick lately but it’s the 30th anniversary of the original Footloose and this movie has been sitting in my Netflix queue for ages. I had read some very positive reviews about this remake and I was a reluctant fan of the original. Mostly the soundtrack is what got me, though. The soundtrack remains in this one but gets updated to be a bit more modern which is actually exactly what happens with everything else in the movie.

If you’ve seen the original Footloose, then you know the plot of the movie. City boy moves into country town, tries to stay out of trouble but ends up bumping heads with authority due in part to the ban on loud music and public dancing and also in part to the preacher’s rebellious daughter. He eventually tries to gather support for a repeal on the ban of dancing and encourages people to express their love of life through the joy of movement that comes whenever someone puts on anything by Kenny Loggins. Like, anything.

There is very little in the overall plot that gets changed from the original to the remake. Ren, the new kid, is now from Boston instead of Chicago which means you occasionally get that Boston accent but I am super thankful that it only seems to come out when the character is stressed or angry so you don’t deal with a heavy Bwahstun accent all the time. As mentioned, the film keeps the same songs but are now mostly covers, which the film really seems to be. Less of a reimagining of the original and more like a cover of it. The same beats and flow are there but it injects a little more edge and a little more modern sensibility (such as instead of playing chicken with tractors, there is now a multi-bus death race that ends with a bus on fire and exploding).

I definitely liked a lot of the small changes and references in the movie. For example, they still have that scene where Ren goes into a warehouse and angry dances around. Not to besmirch Kevin Bacon’s dance improv, but that same scene in the remake feels much more emotional and far less goofy than in the original. Ren is actually dealing with the death of his mother, which is why he moves in with family down in Bomont to begin with. Just that little change from the original makes the desperation to cling to something as simple as dancing mean so much more. I also think all the actors do a great job of making their characters believable. You can definitely understand the emotional pain that drives the minister and his daughter to go to the extremes that they do in response to the loss of a loved one.

I also feel like the relationship that the remake has to the original is quite good. All of the similar shots, references and covers feel less like the movie trying to be the original but better and more like an acknowledgement that there was a lot of good to be found in the old just like there is in the new. I really like a scene towards the beginning that does a great job of encapsulating that dynamic. Ren is going through some stuff in the garage of his new home and finds an old Quiet Riot vinyl record in a dusty old box. He smiles, shakes his head, sets it aside, and then brings up Metal Health on his iPod. In the same way, the movie loves and appreciates what came before but wants it to be more accessible for the modern day.

I liked this new take on Footloose quite a bit. I will, however, say that hearing all the modern versions of the classic soundtrack made me just want to listen to the originals again. I am sorry Blake Shelton but you are no Kenny Loggins. I give this movie a 4.5 out of 5 and if you don’t like it, come at me, bro. Dance off after school behind the bleachers.