This week’s article is going to be dealing with the idea of role playing and when you should be relying on the acting ability of the player and when you should rely on other means of determining social interaction between characters. This is mostly exclusive to tabletop RPGs instead of being an issue in gaming in general but is very much an issue that can arise when playing with other people. It is also a contentious item for a lot of players since they tend to fall on one side or another on the topic. I personally know several people that feel that all character interaction should be done in character and that dice are only for combat and have no place in actual role playing. So what are the issues for either side of the topic?

For those that believe that character interactions should be handled exclusively by the player, it is a core aspect of why they are playing in the first place. I discussed the Immersion Gamer in my Player Type series and they are the type that are most likely playing because it gives them a chance to really lose themselves in a character. Having a serious negotiation with the duke about the payment for ridding the village of kobolds can be a tense and fun moment for one player that can then be completely ruined by another player saying “I’ll roll Diplomacy to see if we can get some more money. What’s the DC?” Having roleplay be the main mechanic that informs how a scene plays out makes it so that the player is more engaged and invested in what happens.

There is also a sense of personal accomplishment that comes from being able to talk your way into or out of something. Many players have stories of how they managed to completely bypass some challenge simply by fast talking a guard or seducing the jailer. It also turns things that would have been fairly common into a memorable experience. Nobody remembers that time they rolled intimidate and got a 17 but you’ll tell stories for years about the time your character shut down an A.I. by getting into a riddle contest with it. Roleplay also helps to create a more cohesive narrative since you can begin to see trends in what characters say or how they react to something which makes further RP easier since you can also call back to things that had been said or done earlier. 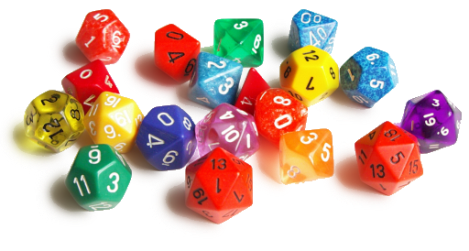 Sit a spell, kids, and let me tell you the tale of the time I rolled some dice.

Now, the other side of the argument isn’t so much that you should never roleplay or anything like that. Just that there should always be the option to let the dice decide when you don’t feel like getting into character. Not everyone is a fast talking con man or a silver tongued bard but when we are playing characters that are supposed to be those things, it can be intimidating for the player to be put on the spot. The argument goes that while the player might not be able to think of anything particularly interesting to say, the character is skilled enough that they would be able to. So rolling out a Bluff check for that person should be fine since the character is a consummate liar even if the player can’t lie their way out of a paper bag. Also, only interacting through RP means that those players that are skilled in social interaction can gain an unfair advantage since they don’t need to invest any points in those skills on the page as they already have them in real life, essentially cheating the system.

The rolling of social interaction opens options of characters up to people that normally wouldn’t or couldn’t play them. It would be unfair if your proto-typical gangly, weakling nerd had to be able to actually bench press 300 pounds in order to play their super muscley Barbarian. In the same vein, it seems strange to require your socially awkward, shy nerds to suddenly become eloquent diplomats just because they wanted to play a Jedi with a high Charisma score. Interestingly, opening up the possibility of just rolling allows for games to be more centered around character interactions than it might otherwise have been. If you have a player that isn’t great at improvising stuff to say and they know that it is the only way you handle interactions, they are more likely to make combat characters or characters based around other things since they aren’t comfortable with the idea of constant RP.

Come on! 10 more reps and you bend the bars on your cell!

As with any decision that fundamentally shapes how your game will be played, the best thing to do is to actually talk with the other people you’re playing with and see where they stand on the issue. Obviously there isn’t going to be much of an issue of everyone you play with is a giant scene-stealing ham that loves to pretend that they are different characters. The main problem is going to come when you have a majority of one type over another without it being an actual unanimous thing. If you have six players and four think everything should be done in character, it’s going to end with either the other two feeling extremely left out and uncomfortable a lot of the time or them just not wanting to play in the game. Getting a good read on what your players want will let you know how best to compromise should a conflict come up.

One of the ways to help integrate the two play styles is to allow for descriptive yet not necessarily in character moments. Some people feel silly saying things in character but can feel better by making it into a more removed telling of what happens. So saying “My character leans in to the guard and threatens him with bodily harm” instead of trying to actually come up with something to say that sounds intimidating. It lets you continue to add to the narrative and the scene without having to come up with dialogue on the spot. It also lets the person running the game have a better idea of how to respond. Just rolling intimidate, in the above example, doesn’t tell how you intimidate which can be important. Does the guard flinch and fearfully hand you the keys or does he break down crying and run home to his family? These are things that can drastically change how the game plays out and are directly informed by the players actions rather than just the skill they used.

Why do people keep fuckin with the town guard?

Another thing you can do is to make it so that you only require in character moments for important scenes. Dealing with a bartender or schmoozing at a party doesn’t necessitate RP for most people. However, the final confrontation with the main villain should probably be handled with more than “Evil McBadguy stands before you. Roll initiative.” Don’t feel bad about coaching players on things as well. Ask them what they want to do, why they want to do it, and finally how their character would go about doing it. Getting a player really thinking about the underlying motives of a character can actually get them to better be able to engage with the world around them. Just don’t try to force someone that isn’t comfortable yet as that is the best way to make them never want to speak up again.