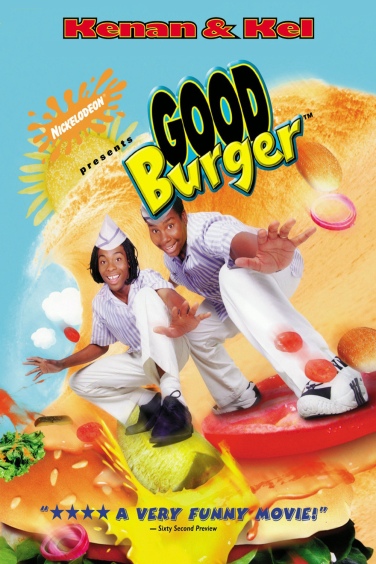 Growing up when I did, I was pretty much right at the target audience age for the show All That on Nickelodeon. If you never watched it, All That was basically Saturday Night Live for 10-15 year olds and one of the recurring sketches they did was about the fast food joint Good Burger. Going into watching this movie, I was fully expecting this to be much like the horrible attempts at turning SNL skits into movies like Night at the Roxbury or Superstar since it’s trying to turn a 3 minute joke into a full length film. Also it’s a random bit from a Nickelodeon show and so I was expecting it to be even lower budget than those other movies. Imagine my surprise when I found myself actually laughing out loud within the first couple minutes and was consistently entertained throughout.

The story follows Ed, the well-meaning fool that works the front register, and Dexter, the self-centered slacker that gets a summer job to pay off what he owes for crashing into his teacher’s car. The movie is that classic 80’s trope of the little guy fighting against the big corporation, which in this case is a Mondo Burger that opens up across the street. Mondo Burger is super sleek, has assembly line production, and sells burgers twice the size of Good Burger for the same price. However, instead of rallying the community to help the underdog, Good Burger just starts using a secret sauce of Ed’s design makes everything delicious. The owner of the Mondo Burger is super angry he didn’t crush the competition and hijinks ensue, as they are wont to do.

One of the most interesting things in this movie is the character of Ed. It makes sense for him to exist solely within the world of Good Burger in the show since that is what the skit about but the movie has him as being like a strange spirit of the store. Dexter is shown going to school, having friends outside work, and even has a fairly touching moment where he talks about his dad abandoning his family. The only time we see Ed outside of something to do with work is the beginning and he even showers in his work uniform. He is also literally never without the little paper work hat they wear. The portrayal of Ed isn’t so much “stupid” as it is like an alien or a robot that takes everything literally. Rather than the humor being laughing at the dumb guy, it’s laughing at how he twists phrasing around back on the person talking. It’s actually quite clever at times.

The movie includes a bunch of random celebrity cameos including Carmen Electra, J. August Richards, and Abe Vigoda (which made me way happier than I can tell you). While the premise is super 80’s, I spent the entire film pointing at things that were super 90’s and saying “Hey look!”. Small list includes a Blockbuster store, Ska music, and Fruitopia. Also, side note, the town is supposed to be Brierville but they didn’t bother covering up the fact that the business right next to the Mondo Burger was West Covina Family Dentistry. Which may have been them actually paying to keep the sign visible since I’m pretty sure Fruitopia and FritoLays also gave them some money for screen time. The product placement at least didn’t distract or get mentioned by any of the characters.

I have to say, I loved this movie way more than I thought I would. I actually recommend it to people even if they have no familiarity with the show. At one point, they escape imprisonment using the power of George Clinton and funk music. It is a baffling yet well sold scene where everyone just goes along with it and it works. I give this movie a 4.5 out of 5 and put it right up there with Dude, Where’s My Car? in my list of comedies that are way better than they have any right to be.